VANCOUVER- The British Columbia Supreme Court has granted Coastal GasLink an interlocutory injunction against members of a First Nation and others who oppose the company’s natural gas pipeline. 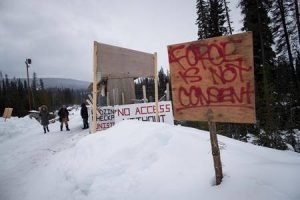 The company is building a pipeline from northeastern B.C. to LNG Canada’s export terminal in Kitimat on the coast.

Coastal GasLink says it has signed agreements with all 20 elected First Nations councils along the 670-kilometres route but hereditary chiefs in the Wet’suwet’en First Nation say the project has no authority without their consent.

The court had granted the company an interim injunction last December against pipeline opponents and protests erupted around the world when RCMP enforced it in January, arresting 14 people along a logging road leading to the construction site near Houston, B.C.

In her ruling Tuesday, Justice Marguerite Church said Coastal GasLink has the permits and authorizations for the project and has satisfied the requirements for an interlocutory injunction.

She said there is evidence to indicate that the defendants have engaged in deliberate and unlawful conduct for the purpose of causing harm to the plaintiff and preventing it from constructing the pipeline.

“There is a public interest in upholding the rule of law and restraining illegal behaviour and protecting of the right of the public, including the plaintiff, to access on Crown roads,” she wrote.

“The defendants may genuinely believe in their rights under indigenous law to prevent the plaintiff from entering Dark House territory, but the law does not recognize any right to blockade and obstruct the plaintiff from pursuing lawfully authorized activities.”

In a statement, Wet’suwet’en hereditary chiefs representing all five clans of the First Nation said they “reject” the B.C. Supreme Court decision.

The First Nation said it is disappointed that the court rendered a decision that contradicts Wet’suwet’en law.

“Coastal GasLink has never obtained consent from the Wet’suwet’en Hereditary Chiefs to enter or work on our territories,” the statement said.

“Under the threat of continued police violence, the Wet’suwet’en have complied with the interim injunction order imposed throughout our territories.”

Coastal GasLink said in a statement that it remains focused on constructing the $6.6-billion project safely and with respect to its Indigenous partners and local communities along the route.

“We are proud of the relationships we’ve built with all 20 First Nations along the corridor, the significant benefits we continue to deliver to Indigenous and local communities, and the role we are playing in reducing global greenhouse gas emissions,” the statement said.

“Coastal GasLink will continue to abide by the terms of the access protocol agreed with Dark House and the Unist’ot’en Camp for access beyond the Morice River bridge and will continue efforts to engage with any affected groups to ensure public safety while our field crews continue to progress their critical activities.”

The company contends the pipeline will deliver significant, long-term benefits for Indigenous and northern B.C. communities along its path and reduce global greenhouse gas emissions by providing natural gas to replace coal burning in Asian markets.

Church said in her decision there is “evidence of significant harm” to the company and others if the pipeline project cannot go ahead because of the blockades, including Coastal GasLink’s contractors and sub-contractors.

The evidence before her was “not clear” on the harm that would be brought to the Wet’suwet’en nation, she said.

Church also said this is an appropriate case to include enforcement provisions within the injunction order, to inform the public of the consequences of non-compliance.

Activities at the Unist’ot’en Camp have continued since the interim injunction and the company is not seeking to restrain the defendants from continuing to occupy the Unist’ot’en camp, operating their healing centre or otherwise using their traditional territories, provided that they do not block or prevent use of the roads or interfere with the plaintiff’s construction activities, she said.

“The interlocutory injunction order would only prevent the defendants from blocking the roads when construction activities are underway,” Church wrote.

Those opposed to the pipeline did not challenge the validity of the company’s permits and authorizations through legal means but rather chose to pursue “unlawful self-help remedies” to further their goal of preventing construction, she said in her decision.

“Use of self-help remedies is contrary to the rule of law and is an abuse of process,” she said.

This report by The Canadian Press was first published Dec. 31, 2019. 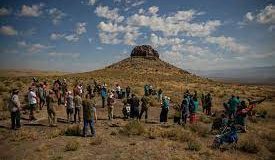 Shipping crude oil through Manitoba has been floated, rejected before