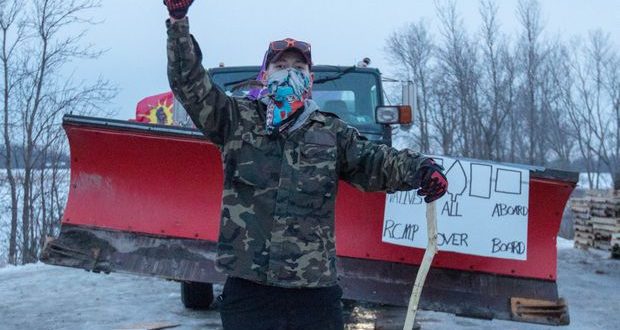 Rail lines are still blocked at Tyendinaga Mohawk Territory near Belleville, Ont., on Feb. 11, 2020, in support of Wet'suwet'en's blockade of a natural gas pipeline in northern B.C. Protests in support of Indigenous hereditary chiefs who oppose a major pipeline project flared across Canada for a fifth day on Tuesday, disrupting British Columbia’s legislature and forcing the cancellation of dozens of commuter and freight trains.

Protesters, who have been camping outside the building since Friday, chanted “Shame” as politicians tried to enter the building with help from security.

Shaylynn Sampson, 20, said demonstrators plan to remain outside the legislature until the province agrees to pressure the RCMP and a natural gas company to withdraw from Wet’suwet’en traditional territories in northern B.C.

“My ancestors have been doing this for hundreds of years. I’m willing to do this as long as it takes,” said Sampson, who has Gitxsan and Wet’suwet’en heritage.

The RCMP began enforcing a court injunction last week against Wet’suwet’en hereditary chiefs and their supporters who have been blocking construction of the Coastal GasLink pipeline, a key part of the $40-billion LNG Canada liquefied natural gas export project.

Protests also affected the country’s rail network as Canadian National Railway Co. said blockades on its lines could lead to it closing “significant” parts of its network.

CN said more than 150 freight trains have been halted since Thursday evening due to blockades near New Hazelton, B.C., and Belleville, Ont., while Via Rail said 157 passenger trains have also been cancelled, affecting 24,500 travellers on routes between Montreal and Toronto, and Ottawa and Toronto. Later Tuesday, Via Rail cancelled service until the end of the day on Thursday on the Montreal-Toronto and Ottawa-Toronto routes because of the blockade near Belleville.

In B.C., it says the blockade near New Hazelton also means normal rail service is being interrupted between Prince Rupert and Prince George.

Federal Transport Minister Marc Garneau said he is working to find a solution and warned that blocking tracks is “dangerous and illegal.”

The RCMP said Tuesday that a temporary exclusion zone in the area was removed and everyone was free to enter the area. The police force is maintaining an office on a forest service road at the centre of the dispute to continue patrols.

“The right to peaceful, safe and lawful protest, and freedom of expression, are important parts of Canada’s democracy,” the Mounties said in a statement. “However, blocking roadways is both dangerous and illegal.”

Coastal GasLink said it was disappointed that police enforcement was required but it will redouble efforts to engage with the hereditary chiefs to find a peaceful and long-term resolution. It said construction would resume this week, marking a return to work for “many members of the Wet’suwet’en community” employed by the project.

Despite the chaos outside the B.C. legislature, Lt.-Gov. Janet Austin delivered the throne speech as planned although a traditional military salute and honour guard were cancelled. The speech touted the province’s record on reconciliation including its support of the United Nations Declaration on the Rights of Indigenous Peoples.

Horgan cancelled a media availability and instead issued a statement in which he said B.C. residents have the right to peaceful protest.

Victoria police said no protesters were arrested but officers worked to ensure the safety of those going to and from the legislature.

“Today has seen members of the legislative assembly, reporters and staff blocked from entering the building. People have been pushed and shoved. This is unacceptable,” said spokesman Bowen Osoko. “Peaceful protest does not involve pushing and shoving, nor obstructing people from their places of work.”

Some politicians described crossing the protest line as an emotional experience. Interim Green Leader Adam Olsen, a member of the Tsartlip First Nation, said it was “absolutely devastating”and he stopped to speak with protesters but they were not prepared to listen to his views.

“I was told I was to stand with the Indigenous people in this province and I said, ‘I am here to do a job. I’m here to call out the very distinct challenges going on around here.’ ”

All 20 elected band councils along the pipeline route, including the Wet’suwet’en council, have signed benefits agreements with Coastal GasLink. However, the Wet’suwet’en hereditary chiefs say the council established by the Indian Act only has authority over reserve lands.

The hereditary chiefs assert title to a vast 22,000-square-kilometre area because they have never signed a treaty ceding their traditional territories.

Protesters in Vancouver also blocked afternoon traffic at a major intersection on Tuesday while Indigenous youth occupying the Justice Department building in Ottawa gave Minister David Lametti 24 hours to act on their demands.

“There are injustices happening in Wet’suwet’en and we expect them to be addressed by the federal government,” said Sophia Sidarous.

Gabrielle Fayant said they’ll end their occupation by Wednesday if Lametti doesn’t act, but that doesn’t mean they’re giving up.

“There will be more mobilization in 24 hours.”

With files from Lauren Krugel in Calgary, Christopher Reynolds in Montreal, Stephanie Levitz in Ottawa and Dirk Meissner in Victoria.This report by The Canadian Press was first published Feb. 11, 2020.