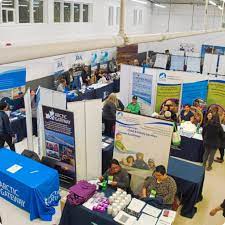 The Kivalliq Trade Show costs upwards of $350,000 to host, but society president Robert Connelly says the spinoff benefits to the region dwarf that number.

Between flights, accommodation, catering, transportation and all the ancillary needs and services, the trade show injects about $750,000 into the local economy.

“That’s a big boost for the regional economy, and of course Rankin Inlet as the host community benefits a lot from that,” said Connelly.

The show was last hosted in person in 2019, though the society continued to run virtual events during the pandemic. It was also the first time the conference could be held at the Agnico Eagle Arena, which made coordination far easier, as delegates didn’t have to be bused to different venues for different events. 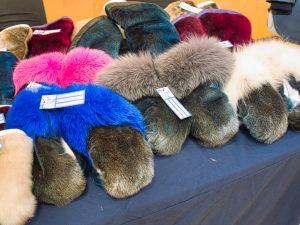 The silent auction at the closing night gala raised more than $24,000, some of which went to the Arctic Rose Foundation and some to bolstering the Kivalliq Entrepreneurship Program.

“This is an Inuit-led initiative,” said Connelly about the event, which featured Inuit speakers, committee members and presenters.

Twenty-two sponsors helped make the event possible, and Connelly was especially proud that the show is largely driven by the private sector.

“The business community has been extremely supportive,” he said. “The vast majority of the budget that’s put together for this event comes from the private sector.”

He couldn’t say enough about the Hamlet of Rankin Inlet’s contributions.

“We are so fortunate,” said Connelly to the background sound of recreation staff tearing down the event in record time. “David Clark and his entire recreation crew, Mayor (Harry) Towtongie and Darren Flynn, the senior administrative officer, have been supportive from day one. The hamlet, if I had to estimate, gave us tens of thousands of dollars in labour and support towards the trade show. We couldn’t do it without them”

Positive vibes filled the air during the show, and Connelly credited that to people’s desire to gather in person again.

“That’s an important aspect of doing business in Nunavut,” said Connelly. “Those in-person meetings, that networking and sitting down, working out the deals that are there to be had, talking about opportunities that are available.”

A big part for him was being able to look around at the full rooms and knowing almost everybody there.

“At the end of the day, all of the businesses that are here, we are neighbours,” said Connelly. “We share land and resources. We depend on each other for support, training, capacity building, employees and business.”

His committee is already hard at work booking next year’s event.

Kono Tattuinee, president of the Kivalliq Inuit Association, was bullish on the Kivalliq-Manitoba connection during his speech to delegates at the Kivalliq Trade Show Tuesday, Sept. 27.

“When we work together, both our regions will see benefits from economic development. Our economic connection to Manitoba cannot be understated.”

He used much of his speech to talk up the Kivalliq Hydro Fibre Link, a proposed mega infrastructure project that would create a transmission line and high-speed internet from Manitoba to the Kivalliq.

Tattuinee said too often trade discussions are based on east-west, when north-south connections in Canada are vital too.

“Truly, to get our industries, institutions, businesses and homes off burning diesel and unlock the potential of our region for future generations to come, we need grid-connected renewable transmission power,” said Tattuinee.

Stewart Burnett is a  Local Journalism Initiative Reporter who works for the KIVALLIQ NEWS. The LJI program is federally funded. Aboriginal Business Magazine does not receive LJI funding.