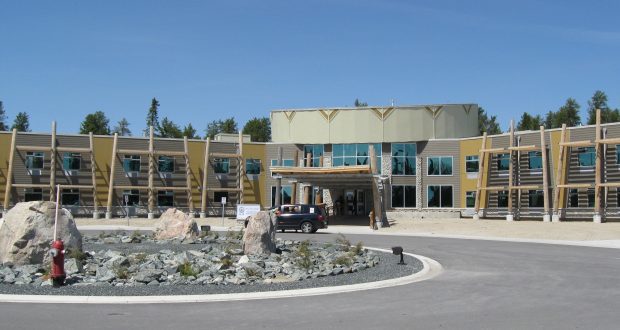 The Jeremiah McKay Kabayshewekamik hostel in Sioux Lookout has been chosen one of this year's Queen's Park Picks. (Ontario Association of Architects Photo.)

Each year on World Architecture Day, which falls on the first Monday of October, the Ontario Association of Architects celebrates architecturally outstanding buildings selected among nominations from MPPs.

This year, the Jeremiah McKay Kabayshewekamik hostel in Sioux Lookout was selected as one of nine “Queen’s Park Picks.”

Susan Speigel, an architect and the president of the OAA, said the building was selected because it’s beautiful and quite striking with very thoughtful design, but it also fulfils an important, necessary role.

“From material selection and layout of interior surfaces to wayfinding and passive solar control, this is an important project with a very unique purpose,” she said.

“The OAA has made a commitment to Reconciliation,” she added.

“We are continuously trying to recognize both Indigenous architecture and practitioners as well as projects that, through consultation, can serve communities, perform critical functions, and have sustainable initiatives included.”

The building was nominated by Sol Mamakwa, the MPP for the riding of Kiiwetinoong.

“It’s a unique building. You see on the roof of the building, the hand drum, how it acknowledges the 30-plus First Nations that are serviced by that facility,” said Mamakwa. “And Kabayshewkamik in our language means? a place that when you are away from home, it’s a place of rest.”

According to the Sioux Lookout First Nations Health Authority, which runs the building as a place to stay for people with medical appointments, “the facility is named after Jeremiah McKay, a respected member of the Kasabonika Lake First Nation and an instrumental leader for better healthcare in the community.”

The hostel has a total of 54 suites for a variety of people and family situations, as detailed on the OAA website profile of the selected buildings. The two dormitory wings are connected by “a large, open lobby space, a central hub that houses communal activities including the main reception, group dining, lounge, and a children’s play space.”

It was completed in 2011 by ft3 Architecture Landscape Interior Design in association with Manasc Isaac Architects (now called Reimagine), said the OAA in a release.

The building’s connected to the hospital directly, so patients don’t need to go outside when they get care, said Mamakwa.

“I’m very honoured on behalf of  SLFNHA , the town of Sioux Lookout and  residents  who welcomes the people who travel for medical appointments.”

He noted the hostel has been over capacity for a number of years, requiring another one to be built.

SLFNHA said the “vision and design of the facility was determined through input from a large number of stakeholders, including; First Nation members, Chiefs, Health Canada and the Government of Canada, the Sioux Lookout First Nation Health Authority, Elders, future generations, hostel staff, families, the Municipality of Sioux Lookout and the Sioux Lookout Meno Ya Win Health Centre.”

The OAA said with the easing of public health restrictions, community-centred buildings are coming to the fore and “an emerging theme from this year’s QP Picks is community, with numerous buildings playing important roles as spaces where people gather.”

The story was updated to reflect comment from the Ontario Association of Architects.