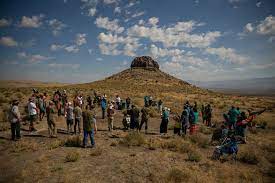 “People gather for a ceremony at Sentinel Rock, at Thacker Pass, Nevada on Sunday, Sept. 12, 2021 site of a proposed lithium mine, gather in remembrance of a massacre of Paiute people near the spot on Sept. 12, 1865.” Credit: Spenser Heaps

Indigenous leaders have launched a new site, at sirgecoalition.org. The site went live last month on Aug. 9, which was International Day of the World’s Indigenous Peoples.

The launch is a part of the official public announcement of the new Secure Indigenous People’s Rights in a Green Economy (SIRGE) coalition, with its primary focus being elevating Indigenous leadership through the creation of a broad coalition and the promotion of constructive dialogue.

The coalition said the increase in mining stems from the high demand for minerals such as nickel, lithium, cobalt, and copper, which are necessary for renewable energy and are critical to the development of a green, low-carbon economy.

The coalition said transition to this type of economy requires governments and companies involved in the new green economy to observe and implement the rights of Indigenous Peoples enshrined in UNDRIP, including the right to free, prior, and informed consent. Cultural Survival, First Peoples Worldwide, Batani Foundation, Earthworks and the Society for Threatened Peoples came together to launch the SIRGE coalition.

According to the coalition, Columbia Valley residents located on the unceded territories of the Secwepemc and Ktunaxa Peoples and the land chosen as home by the Metis Peoples can empathize and sympathize with the concerns of their U.S. neighbours.

“The green economy is what the world, countries and societies are striving for right now,” said Pavel Sulyandziga (Udege), Batani Foundation president. “But we must already understand today that if we do not create the human rights prerequisites and conditions for the green economy, it can become a tragedy for Indigenous Peoples on whose lands the natural resources will be extracted. The creation of the SIRGE coalition is an important step toward a more just and fairer world. I am confident that we will not be alone and that with our support, the green economy will be truly sustainable and just.”

The coalition said in Peehee Mu’huh (Thacker Pass), Nev., attempts are being made by Lithium Americas to develop a lithium mine that will impact the sacred lands of the Shoshone and Paiute Peoples. The coalition noted that in Guatemala, the Fenix nickel mine has been blockaded peacefully by members of the Indigenous Q’eqchi’ community as it protests the lack of consultations and free, prior, and informed consent for the mine, which has polluted the community’s traditional fishing grounds in Lake Izabal.

Studies show that Indigenous territories often contain significant concentrations of untapped heavy metal reserves around the world In the United States, it is estimated that 97 per cent of nickel, 89 per cent of copper,79 per cent of lithium and 68 per cent of cobalt reserves and resources are located within 35 miles of

Native American reservations. The coalition said mining in U.S. states have had direct effects on the Columbia River, which is sacred to many, including the Secwepemc and Ktunaxa First Nations.

Chadd Cawson is a Local Journalism Initiative Reporter who works for

Shipping crude oil through Manitoba has been floated, rejected before