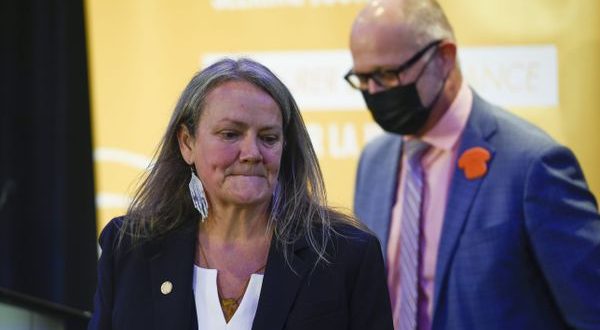 Kimberly Murray speaks after being appointed as Independent Special Interlocutor for Missing Children and Unmarked Graves and Burial Sites associated with Indian Residential Schools, at a news conference in Ottawa, on Wednesday, June 8, 2022. THE CANADIAN PRESS/Justin Tang

Kimberly Murray was appointed as Independent Special Interlocutor for Missing Children and Unmarked Graves and Burial Sites associated with Indian Residential Schools, at a news conference in Ottawa, on Wednesday, June 8, 2022. THE CANADIAN PRESS/Justin Tang

“I worked at the Truth and Reconciliation Commission. I heard survivors who had to dig those burials to put the children in the ground. I have seen photographs of funerals of children at Indian residential schools,” said Murray.

“There are children buried on the grounds of Indian residential schools. And we need to find them and we need to know who they are.”

“I promise that I will do everything in my power to ensure that the office of the special interlocutor is here to help and not do any further harm in any way,” said Murray.

He said through engagements with communities directly impacted, as well as First Nations, Metis and Inuit leadership over the past year, a “clear mandate” for the office had been co-developed.

The Independent Special Interlocutor for Missing Children and Unmarked Graves and Burial Sites associated with Indian Residential Schools will identify needed measures and recommend a new legal federal framework to ensure the respectful and culturally appropriate treatment of unmarked graves and burial sites of children at former residential schools. The work will be done in collaboration with First Nations, Metis and Inuit governments, survivors, families, communities and representative organizations.

The office of the special interlocutor has been funded in the

2022 budget with $10.4 million over two years. The position is for two years, with an interim report required after one year and the final report at the end of two years. Those reports will be delivered to Lametti, Indigenous communities and the general public.

Murray moves into her new role June 14. Along with her years with the TRC and her involvement in the 94 Calls to Action outlined by the commission, since August 2021 she has been overseeing the investigation into deaths at the Mohawk Institute, the longest running residential school in Canada.

Murray is a member of the Kanehsatake Mohowk Nation in southwestern Quebec.

Both Casimer and Delorme were supportive of Murray’s appointment and her mandate.

“This role will come with a wealth of experience that has demonstrated a commitment to serving residential school survivors and their families and their communities. So we look forward to working with Canada, the special interlocutor and our brothers and sisters from across Turtle Island as we work for the children and their relations to achieve some measure of comfort and justice for them,” said Casimer.

It was the uncovering of 215 unmarked graves at the Kamloops Indian Residential School in May 2021 that led to the action taken today.

“This position is truly going to make sure that we have all opportunities to fulfill justice, to get names to unmarked graves and to validate the technical side,” said Delorme.

Among those technical issues, he said, is “the challenge” of who owns the data that is acquired through ground penetrating radar (GPR).

About three weeks after the Kamloops findings, the Cowessess First Nation used GPR to identify 751 unmarked graves at the nearby Marieval Indian Residential School.

Murray said she anticipated discussions on justice and accountability will be a priority topic for many of the Indigenous communities she meets with.

“For us, it’s about finding the truth before we can determine what kind of justice needs to be pursued. And it’s also about preserving the evidence, to ensure rigour in our investigation to ensure that, if we find that crimes were committed, the evidence is there to pursue those criminal prosecutions,” said Casimer.

She also pointed out that the children who attended the Kamloops school came from other parts of British Columbia, as well as the Yukon, Alberta and the United States so protocols for those communities would also have to be followed moving forward.

As for the appointment of a special prosecutor, Lametti said he did not have the power to create such a position under federal law.

However, if that was a recommendation from Murray’s work, such power could be enshrined in new federal legislation.

As for involvement of the United Nations in investigating unmarked graves in Canada, Murray said her office’s mandate is not to interfere with any processes that may be “triggered” provincially, nationally or internationally.

Casimer said any collaborative efforts would be welcomed.

“The UN does have a role to play. We know that. In moving these investigations forward and also bringing it to light. These are terrible, terrible histories and these are also consequences of colonialism. Moving forward, it’s going to be a long road ahead of us but it’s going to be taking those collaborative efforts,” said Casimer.

In a statement issued by the Assembly of First Nations following Murray’s appointment, National Chief RoseAnne Archibald said she had requested a meeting with UN Special Rapporteur Francisco Cali Tzay during his visit to Canada “to speak about other international options.”

Cali Tzay will be visiting Canada but has not been mandated to investigate crimes related to the residential schools.

The AFN has also asked the International Criminal Court to investigate and hold all parties responsible and accountable for crimes against humanity carried out at the residential schools.