Details of a National Indigenous Economic Strategy (NIES) have been revealed.

A press conference was staged in Ottawa on Monday, June 6, to provide information on the strategy, which was built and designed by Indigenous leaders, institutions and organizations from across Canada.

Reps from 25 Indigenous organizations throughout the country assisted with the creation of the strategy.

The strategy includes 107 Calls to Economic Prosperity, which is intended to help guide the country to a more prosperous and equitable future. 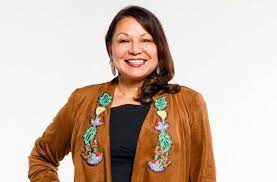 “It’s a living document,” said NIES spokesperson Dawn Madahbee Leach. “So, it will be changing as we move forward.”

Madahbee Leach is also the chair of the National Indigenous Economic Development Board (NIEDB).

Madahbee Leach said the NIES has been a couple of years in the making.

“We started talking about it formally in January of 2020,” she said.

That’s when the Organisation for Economic Co-operation and Development, a group with 38 member countries, released a report stating Canada should have an Indigenous strategy.

The wheels were set in motion and Madahbee Leach said three meetings were held, two of them before COVID started spreading throughout Canada, with representatives from Indigenous organizations across the country.

It was then decided that reps from five organizations would be responsible for drafting the strategy.

Besides the NIEDB, the core group of those who were selected to draft the strategy were individuals representing the Canadian Council for Aboriginal Business, Council for the Advancement of Native Development Officers, National Aboriginal Capital Corporations Association and Indigenous Works.

“We originally thought we could get it done within a year,” Madahbee Leach said. “Each time we did a draft we went to all of the other organizations for them to provide input.”

“We had 36 core group meetings and many other meetings with sub-committees,” Madahbee Leach said.

The 116-page strategy can be viewed in full here:

It is available in English, French and Inuktitut.

The strategy reveals that it wouldn’t just be Indigenous people who would benefit if policy changes and investments are made in order to stop excluding Indigenous people from economic opportunities across the country.

“We know if we had the same education, income and employment opportunities as other people in this country we could contribute between $30 billion to $100 billion to Canada’s GDP,” Madahbee Leach said. “Why wouldn’t people want to see this done?”

All four of the pathways in the strategy are designed to make the country as a whole prosper.

“Indigenous entrepreneurs have access to the information, tools, capital, and support systems to give them the best possible opportunities to build and grow successful businesses.”

Some of the Calls to Economic Prosperity in this pathway include creating a financial literacy and business curriculum for youth and adults, developing mentorship programs and fostering a national network of Indigenous chambers of commerce.

A portion of another strategic statement under the People pathway reads: “Indigenous Peoples have access to readily accessible culturally appropriate education at all levels, pre-kindergarten through post-secondary.”

And calls for this statement include enacting legislation for equal funding for Indigenous education from Kindergarten through Grade 12, partnering with organizations focused on Indigenous STEM programs and creating workforce engagement strategies.

Madahbee Leach said implementation of the strategy should not be left up to others.

“There’s a lot of things we can be doing as Indigenous people,” she said. “It’s not waiting for the government to do things for us.”

Under the strategy’s Lands pathway, a strategic statement includes the desire to have Indigenous groups become participants at international climate change forums and on committees.

An ensuing call includes having Indigenous people and environmental bodies serve as monitors for all energy and resource projects.

The Infrastructure pathway includes a statement that Indigenous communities have the capacity to participate and the opportunity to take the lead economic position and equity ownership in any infrastructure development.

And a statement from the Finance pathway includes the belief that legislative barriers to accessing capital and business development are removed and replaced with appropriate legislative protocols in line with Indigenous terms.

Though plenty of details are included in the strategy, Madahbee Leach said a couple of items were purposely excluded.

“There are two things we didn’t do,” she said. “We didn’t cost it out. And we didn’t put in any timelines. We feel everything can start concurrently.”

Madahbee Leach said officials from the First Nations University of Canada have offered to measure the progress of the strategy.