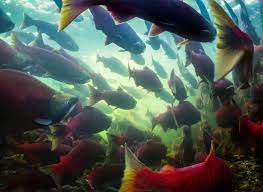 VICTORIA- Any federal government plans to move away from open-net pen salmon farms in British Columbia should come with transition help for the industry and workers, says Premier John Horgan.

A letter dated March 10 from Horgan to Prime Minister Justin Trudeau said concern is widespread on Vancouver Island that the federal government is poised to make a decision that could threaten hundreds of jobs and the economies of coastal communities.

Federal Fisheries Minister Joyce Murray’s mandate letter includes the development of a transition plan from open-net pen salmon farming by 2025, coinciding with her department’s forthcoming decisions on whether to renew many fish farm licences and tenures in coastal B.C. waters, says Horgan’s letter.

It says the communities are concerned the federal government is poised to cut many, if not all, salmon farm licences in the coming weeks.

“If true, this action would eliminate hundreds of jobs at a stroke and undermine the economies of dozens of communities,” says the letter.

“I urge you to provide assurance to the salmon farming sector that an appropriate transition program will be implemented, one that considers their interests and concerns.”

The letter also says eliminating salmon farm licences “would fly in the face” of commitments by the federal and provincial governments to pursue the intentions of the United Nations Declaration on the Rights of Indigenous Peoples, considering some First Nations are exploring salmon farming.

Horgan’s letter says the development of a transition plan from open-net pen farming must include First Nations and communities that rely on fish farms as an economic opportunity.

The premier says he appointed Josie Osborne, the provincial minister responsible for fisheries, to meet with Murray to discuss B.C.’s role in a transition plan.

Murray was not available for comment, but her press secretary, ClaireTeichman, said in a statement that the minister is committed to the transition from open net-pen salmon farms in B.C. coastal waters.

Teichman said a decision on licenses will occur over the coming months and no decisions are being made immediately.

“We recognize the transition must provide a vision to create economic opportunity for communities where necessary,” she said.

“As always, continued, close collaboration with Indigenous communities, the province of British Columbia, industry, scientists and other stakeholders will be key to developing a responsible plan and completing the transition process.”

The federal government announced in December 2020 plans to phase out open-net pen farms in the Discovery Islands.

The Cohen commission on the decline of Fraser River sockeye in 2012 said the Discovery Islands act as a bottleneck along wild salmon migration routes and eliminating the fish farms was one of its key recommendations.

The recommendation was also contingent on Fisheries and Oceans finding more than a minimal risk to migrating sockeye by September 2020.

The department reported in September 2020 that it found nine pathogens from farmed Discovery Islands salmon, but said they posed minimal risk to wild stocks.

The B.C. Salmon Farmers Association said an independent economic analysis released last month found the province could lose more than 4,700 jobs and up to $1.2 billion in economic activity annually if salmon farm licences are not renewed.

Association spokeswoman Ruth Salmon said 79 salmon farming licences are up for renewal by the end of June and the consequences for B.C.’s Indigenous and non-Indigenous communities would be “devastating.”

She said the association is pleased the premier has written to the prime minister, which adds weight to the issues facing the industry and communities.

A statement from B.C.’s First Nations Wild Salmon Alliance says more than 100 First Nations support the federal government’s plan to transition away from open-net salmon farms by 2025 and called on Murray to “stay the course.”

“We are deeply concerned that wild salmon runs in B.C. have suffered from the impacts of fragmented management decisions at both the federal and provincial levels, decisions that have contributed to the precarious extinction-level state of wild salmon and which must now be corrected if we are to see wild salmon runs successfully rebound,” says alliance spokesman Bob Chamberlin.

He says the alliance supports Horgan’s letter to Trudeau because it “calls for a plan to assist workers, their families and the broader community as the transition of open-net fish farms out of B.C. waters is implemented.”

This report by The Canadian Press was first published March 16, 2022.