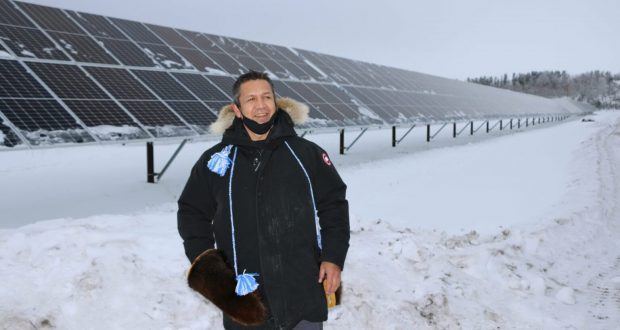 In an effort to increase their long term sustainability and cut greenhouse gas emissions, the Fort McKay Metis Nation will be unveiling their completed solar farm before the end of summer.

“This program meets a goal of showing that we can provide clean electricity, albeit in a smaller capacity,” said Eddison Lee-Johnson, CEO of the Fort McKay Metis Nation (FMMN). “The long-term goal is to be able to be responsible and provide clean electricity, while providing houses that are built to reduce environmental and climate change impacts.”

The project’s original plans were for there to be roof-mounted panels on houses in the community. However, some houses were not in optimal locations to receive panels and the nation opted for the two ground-mounted projects instead.

The solar farm will generate 87,700 kilowatt hours per year of power for the community of 120 members. Lee-Johnson said that the community is continually looking for ways to mitigate the effects and adapt to the realities of climate change.

“It’s not new for Aboriginal communities to be socially and environmentally responsible,” said Lee-Johnson. “If we can contribute to reducing the energy supplied to our nation, we can, in turn, continue our work taking care of the environment.”

The project now is the second of its kind in the region after Fort Chipewyan opened a 6,000-panel solar farm in November 2020.

Completed by Three Nations Energy, their solar farm will save 800,000 litres of diesel fuel annually for the community, while cutting greenhouse gas emissions by 2,170 tonnes.

Though the FMMN  project, being completed by Solare Canada, is modest in comparison to the size and scope of the Fort Chipewyan farm, the community will also be launching a housing sustainability plan in the fall with potential for additional energy reduction projects in the future.

“The goal is to identify what type of houses we will need and even though they will be constructed, they will be built in a sustainable manner,” said Lee-Johnson. “Designed to reduce energy, to be efficient, to meet the needs of our members but they also will address the climate and environment that we are in.”

-With files from Sarah Williscraft