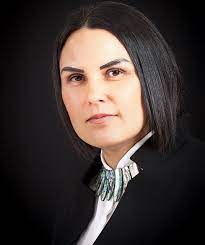 With Canada facing a $400 billion debt as a result of the coronavirus pandemic, Indigenous peoples can play a vital role in strengthening the country’s economic situation.

“Indigenous people are saying we want to succeed in business, we want to be included, we want to be part of the solution,” said Carol Anne Hilton in the keynote address Tuesday morning at the Indigenomics by Design virtual economic forum held in Victoria.

In 2019, Hilton, founder of the Indigenomics Institute, told chiefs at the annual general assembly for the Assembly of First Nations that a $100 billion national Indigenous economic target was not unrealistic.

“What was important about (that) moment was being able to look at a future trajectory of Indigenous economic power. It centred who we are as Indigenous people in a narrative of success and it shifted our focus to be able to demonstrate who we are as people, the resilience that we’ve come from and our ability to facilitate our economic strength today and into the future,” she said.

Hilton pointed to multiple billion-dollar projects and budgets already being accessed or established by Indigenous communities and businesses as evidence of the emerging $100 billion Indigenous economy.

In Alberta, she points to the province’s Indigenous Opportunities Corporation, which has budgeted $1 billion to backstop natural resource projects undertaken by Indigenous communities and companies; two projects have already received loan guarantees.

Project Reconciliation, a First Nations group, recently expressed its intentions to launch an up to $1 billion sovereign wealth fund that would see First Nations communities partner with Corporate Canada to invest in energy transition projects.

In British Columbia, the Squamish Nation signed a billion-dollar land deal to see the construction of an LNG plant to ship gas to Asia.

In Nova Scotia, a Mi’kmaq coalition sealed a $1 billion deal to purchase Clearwater, one of the largest seafood companies in North America.

The federal government has committed to awarding at least five per cent of its procurement contracts to Indigenous providers, a deal, says Hilton, that could easily result in $1 billion being spent.

“(We need) to be able to understand how that expresses itself as economic power. The normalization of hitting $100 billion in five years ? is not only possible but calls on our leadership to pay attention and to engage within this concept,” she said.

Hilton says its about changing the perception of Indigenous people being seen as a problem that needs to be solved and as cost or burden to the national financial system. She says Canada is founded on that belief: residential schools, the **>reserve<** system and the **>Indian<** Act.

“The response to the Indian problem was the grand design of the destruction of the Indigenous population,” she said.

The Indian Act, she points out, “was to serve the economic disorientation of the Indigenous population and the dis-invitation to the economic table” of Canada.

“The perception and lens of seeing Indigenous people through the cost side of the equation of this country is an old story. It’s time to get over that story. The story that we can choose is of Indigenous economic empowerment and that story has chosen itself in the uptake of Indigenous resilience over time. We are still here,” said Hilton.

For a fulsome Indigenous economy to be realized, the capital needs to reach the businesses and keep up with the pace of growth.

Youth also must have the opportunities for training and education.

“Indigenomics is about imagining a radically different future (and) we need to be actively engaged with (this) within our governments, within our policy tables, within the corporate boardrooms, and within our ability to facilitate economic partnerships at business development. It’s time to get ready,” said Hilton.

Indigenomics by Design virtual economic forum is a two-day event that concludes June 23.