Home » Business » Tribes dispute reservation where a $1B casino is planned 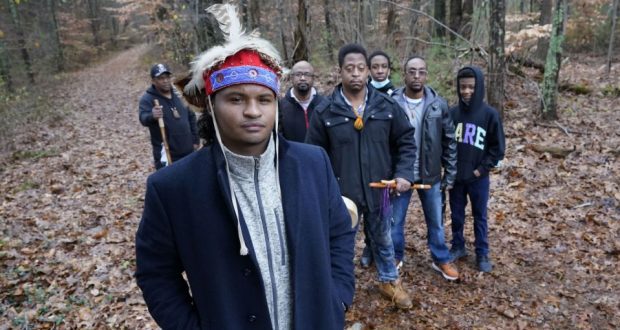 Larry Fisher, chief sachem of the Mattakeeset Massachuset tribe, foreground, poses with other tribal members at Titicut Indian Reservation, Friday, Nov. 27, 2020, in Bridgewater, Mass. A rift has been widening between Native American groups in New England over a federal reservation south of Boston where one tribe is planning to build a $1 billion casino. The Mattakeeset Massachuset tribe contend the Mashpee Wampanoag tribe doesn't have exclusive claim to the lands under their planned First Light casino in the city of Taunton, as they've argued for years. (AP Photo/Elise Amendola)

Tribes dispute reservation where a $1B casino is planned

Larry Fisher, chief sachem of the Mattakeeset Massachuset tribe, foreground, poses with other tribal members at Titicut Indian Reservation, Friday, Nov. 27, 2020, in Bridgewater, Mass. A rift has been widening between Native American groups in New England over a federal reservation south of Boston where one tribe is planning to build a $1 billion casino.  (AP Photo/Elise Amendola)

BOSTON- A rift is widening between Native American groups in New England over who has claim to scores of acres south of Boston where one tribe has been trying for years to build a $1 billion casino.

The recently revived Mattakeeset Massachuset Tribe argues it’s the rightful heir to the land in Taunton set aside by the federal government for the Mashpee Wampanoag Tribe, which is planning to build a hotel, casino and entertainment complex.

The Mattakeesets want the Mashpees and state and local authorities to recognize their land claim, which they base on colonial-era documents.

“They blatantly fooled the whole entire country about this land belonging to them,” said Larry Fisher, who has been working to revive the tribe since becoming its chief sachem in 2014, of the Mashpees. “We just want the truth to be told. It belongs to us. The Mattakeesets.”

The Mashpee Wampanoag Tribe, which famously traces its ancestry to the Native Americans who shared a fall harvest with the Pilgrims 400 years ago, counter that Fisher’s group is just a smaller band within the broader Wampanoag people who have inhabited Massachusetts for thousands of years.

The Mattakeeset Tribe currently has a few hundred members, according to Fisher, but does not have federal recognition or a land base like the Mashpee Tribe, which was federally recognized in 2007 and has roughly 3,000-members.

“Larry is well-meaning but very confused,” said Steven Peters, the Mashpee Tribe’s spokesman. “The Mattakeesets and the Massachusets 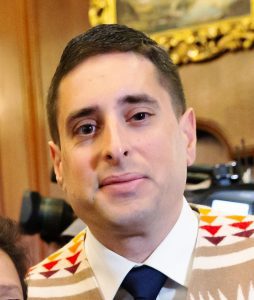 are Wampanoags.”The dustup is the latest wrinkle in the Mashpee Wampanoag Tribe’s tortured, years-long quest for federally protected land, and the lucrative rights to build a tax-exempt casino on it. 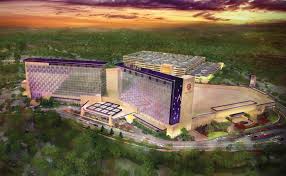 The Mashpee Wampanoag tribe plans to open a resort casino south of Boston.

The Cape Cod-based tribe was granted a more than 300-acre reservation in the waning months of the Obama administration in 2016, but the Trump administration moved to revoke the reservation in what the tribe and its supporters complained was a dangerous precedent. A federal judge in June halted the move; the Interior Department has appealed.

Meanwhile, the tribe’s prominent, longtime chairman was arrested last month on federal bribery charges in connection with the casino project. Cedric Cromwell has denied the allegations, but has been ousted as chairman by tribe leaders.

Fisher, a 33-year-old Boston-area substance abuse counsellor, said his tribe has no quarrel with the half of the tribe’s roughly 300-acre reservation that’s located in the town of Mashpee on Cape Cod, where the tribe has operated a government centre and other tribe services for years.

But he contends the Taunton-area half, located some 50 miles (80 kilometres) from Mashpee, was never part of the rival tribe’s historic territory.

Fisher points to a book published last month by Jeremy Bangs, founder of the Leiden American Pilgrim Museum in the Netherlands, which argues that a 1664 deed designated the lands as the “Titicut Reserve” and specifically set it aside for the Mattakeesets in perpetuity. Fisher says the deeded lands encompass all of what is today Taunton, Middleborough and Bridgewater, as well as parts of Duxbury.

Complaints that the Mashpees are inflating their ancestral territory at the expense of other Native Americans aren’t new. At least two members of other Massachusetts tribes have raised the issue in recent years, and local casino opponents have made similar arguments in their long-running federal court challenge.

The state Commission on Indian Affairs hasn’t officially waded into the debate, but John Peters, the agency’s executive director and a member of the Mashpee Wampanoag Tribe, was skeptical of the rival tribe’s claim.

“To give credibility to a self-proclaimed chief of a tribe that hasn’t been heard of in several hundred years demeans the integrity of our culture,” he said.

Bangs said he wrote the book, which expands on his previous published works on New England’s Native American tribes and European colonists, to shed light on a part of local history he believes has become blurred over the years.

“Some of the Wampanoags have tried to pretend the Massachusetts never existed, and that goes against hundreds of years of history,”

he said. “They don’t call the state Massachusetts for nothing.”

Bangs, a former chief curator at Plimoth Patuxet, a Massachusetts museum that recreates the historic English colony with period actors, stressed his work wasn’t funded by the Mattakeesets or other interests.

The historical evidence, he added, is in plain sight: the colonial documents cited in his book are housed at the county registry of deeds in Plymouth.

Peters, the spokesman for the Mashpee Wampanoag tribe, said he and other tribe scholars haven’t reviewed Bangs’ book.

He said the tribe has invited Fisher for a sit down to review the Mashpee Tribe’s land claim evidence, which he said is detailed in more than 14,000 pages the tribe submitted for its federal land in trust application.

Fisher counters that no such olive branch has been offered, despite his attempts to meet with Mashpee leaders over the years.

He said his tribe is instead focused on asserting its jurisdiction on its ancestral lands, which includes hosting ceremonies and other recent gatherings at Camp Titicut, a 25-acre park in Bridgewater with a Native American burial ground, without seeking town permits.

Fisher said the tribe has also raised its concerns to the U.S. Department of Justice’s Office of Tribal Justice, which didn’t respond to a request for comment this week.

And while it supports legislation creating a state tribal recognition process in Massachusetts, he said the tribe isn’t pursuing federal recognition. That special status acknowledges a tribe’s sovereignty and provides access to federal funding and other benefits, so long as the tribe can show it’s a distinct community that’s been in existence since 1900 with some form of governance.

“At this time, we are looking to move on all efforts of sustainable and cultural development on our tribal lands,” Fisher said. “With or without state or federal support.”