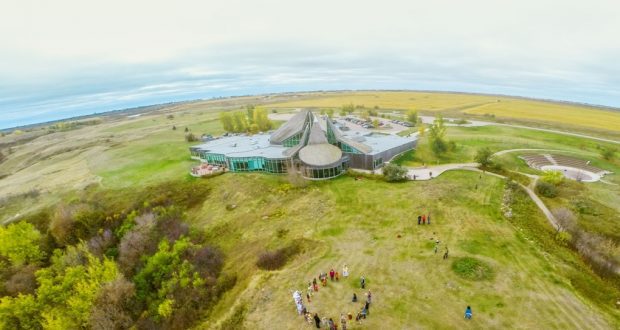 Officials with a First Nations heritage park in Saskatchewan are still beaming after last week’s announcement of the winners of the Tourism Saskatchewan Awards of Excellence.

Wanuskewin Heritage Park, which is located just outside Saskatoon and is a non-profit cultural and historical centre, captured a record three awards.

This marked the 31st year of the provincial tourism awards and the first time Wanuskewin had captured three of the categories.

Wanuskewin also established another record by being nominated in five categories.

About 90 nominations had been received for the various award categories.

Because of the COVID-19 pandemic, the awards ceremony was held virtually on Nov. 10. It had originally been scheduled to be staged in Regina this past April.

Besides having Walker receive a Tourism Builder award, Wanuskewin was also presented with the Business of the Year Award, for a company with more than 20 full-time employees, as well as the Gil Carduner Marketing Award.

Except for the Tourism Builders recipients who were honoured for their efforts over a number of years, all of the other award winners were recognized for their work last year and into the early parts of 2020.

“It’s been an amazing year, despite the year we’ve had,” said Darlene Brander, Wanuskewin’s CEO. “And this really recognizes the hard work and vision the team has had in place for a long time now.”

Various health and safety restrictions to deal with the COVID-19 pandemic forced Wanuskewin to close its doors to the public for four months this past spring and summer.

But Brander believes winning the provincial tourism awards will generate even more publicity now for Wanuskewin, which was declared a Canadian national historic site in 1986.

“It clears the path forward for us to go on to greater things,” she said.

One of those greater things that the park is seeking is UNESCO World Heritage designation, which if granted would recognize there is no place else on the planet like Wanuskewin.

Park officials are currently preparing all the necessary documentation so they can send an application submission to the United Nations.

It is a lengthy process. Park officials estimate it could be two or three more years before they find out whether their application is approved.

If it is, Wanuskewin would become Saskatchewan’s first world heritage site. Visitors to the park can learn about the lives of Indigenous people who lived in the area as many as 6,000 years ago.

Andrew McDonald, Wanuskewin’s director of marketing and communications, was thrilled with the three awards the park captured at this year’s provincial tourism ceremony.

But McDonald was especially proud to see Walker singled out as a Tourism Builder.

“He’s a real strong driving force behind the park,” McDonald said of Walker. “He was one of the founders of the park. And his work has been going on in the park for about 40 years.”

Besides being Wanuskewin’s chief archaeologist, Walker continues to serve the park as a member of its board of directors.

Walker has had a voice in selecting many of the park’s permanent exhibits.

“And he is on a daily basis involved with the bison in the park,” McDonald added.

Wanuskewin created new paddocks for bison at the end of last year. Bison were then brought in from other parks, signifying the first time in 150 years that they had been on Wanuskewin land.

This past spring also marked the first time in 150 years that bison had been born on Wanuskewin land. There are now 15 bison on the park property.

McDonald was also pleased Wanuskewin earned the Business of the Year award.

“We’re very proud to have won that,” he said. “Even pre-COVID there were so many up and coming tourism opportunities.

Entrepreneurship is contagious in Saskatchewan where there are a lot of new businesses popping up.”

Wanuskewin’s Katie Willie, who is an archaeological guide, had been nominated in the Employee of the Year category.

But this award was presented to Arnold McKenzie, who works for the Legislative Assembly Service of Saskatchewan.

Wanuskewin was also nominated for the Indigenous Tourism Experience Award, an accolade it did win last year. But this year’s winner was Aski Holistic Adventures operated by Metis businesswoman Michela Carriere.