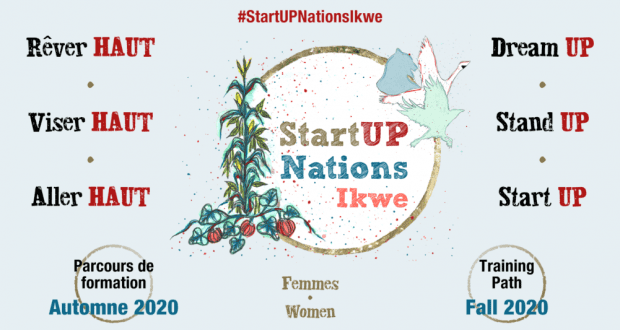 KANESATAKE- The Kanesatake Economic and Business Development department was selected to be part of the winter 2020-2021 StartUP Nations Ikwe cohort, a first for the community.

This cohort will follow a new training program that encourages Kanehsata’kehro:non women to develop their business and economic skills.

(FNQLEDC) and the Quebec Native Women (QNW) to offer a series of workshops in entrepreneurship and social economy – an economic framework based on collaboration instead of individualism.

“This is an empowering project for women, to strengthen their self-esteem and help those who haven’t dared to start their own business yet,” said Kanesatake economic development’s project coordinator Nadia Robertson.

From January to May 2021, five women selected by the economic department will follow a 35-hour online course, joined by six groups of Onkwehon:we women living in urban areas or communities. Robertson explained that the goal is to expand women’s business knowledge through different classes such as finance and administration.

Robertson summarized the project by saying that the focus is on the big picture. She said it’s about understanding “how the business industry works exactly.”

While the idea of offering private entrepreneurship workshops in the future is not out of reach, StartUP Nations Ikwe currently focuses on social economy to develop collective projects such as a co-op or non-profit organization.

“The initiative has been compared to Dragons’ Den,” said Robertson, “with sale pitches and investors. It’s very selective!”

Robertson, who’s originally from Gespeg First Nation, has been working for the economic department since 2019, along with Manon Jeannotte, Tracy Bonspiel and Patrick Gelinas. She explained that their work model is based on ancestral values such as cooperation and mutual aid, which correspond exactly with this year’s StartUP Nations theme.

This is the first time that the FNQLEDC’s initiative is strictly for women. The two previous editions, in 2017 and 2019, were initially looking to support First Nations youth in growing their entrepreneurship skills.

The FNQLEDC social economic advisor Marie Hanquez attributed the idea of having a women’s cohort to QNW.

The organization highlighted the need for women to not only develop and grow their own businesses, but also the positive impact that this will have on the overall community – something that historically FNQLEDC has emphasized since it was founded in 2000.

“There was a natural affinity between our organizations,” said Hanquez.

StarUP Nation Ikwe is open to women of all ages, even if they don’t necessarily have a clear idea of the exact type of business they are interested in or would like to launch.

Each group will receive a $500 bursary to cover the cost of developing a business, said Robertson.

Robertson believes that a crucial aspect of the project is fostering a healthy environment independent from any governing entity such as a band council.

She explained that even though the department received support from the Mohawk Council of Kanesatake (MCK), the band council won’t interfere on any level of the project.

“Sometimes in communities, people are afraid of such interference,” said Robertson.

For her, the collaborative values of StartUp could act as a healing process for everyone in the community. She said that it forces people, even families, to work together towards the same goal while leaving a place for unexpected leaders to thrive.