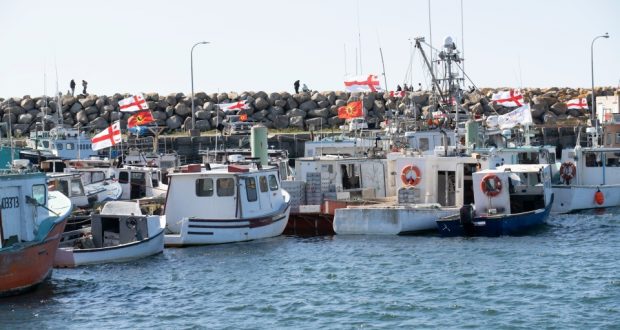 HALIFAX-Potential sales have cost the band more than $1.5 million.

Mike Sack, chief of the Sipekne’katik First Nation, issued a statement today saying the band has also been blacklisted by lobster buyers.

“The (non-Indigenous) commercial fishery has systematically boxed us out of the market,” Sack said in a statement. “It will take time to

rebuild our relationships in the supply chain of people and companies we did business with who are now rightly afraid of retaliation.”

The First Nation attracted national attention on Sept. 17 when it launched a “moderate livelihood” fishing fleet in St. Marys Bay, almost two months before the federally regulated fishing season was set to open.

Sack has said the Mi’kmaq band’s members are exercising their constitutionally protected treaty right to fish where and when they want, as affirmed by the Supreme Court of Canada in a historic 1999 decision.

Citing treaties signed in the 1760s, the court said the Mi’kmaq, Maliseet and Passamaquoddy bands in Eastern Canada can hunt, fish and gather to earn a “moderate livelihood.”

However, non-Indigenous protesters have asked federal authorities to stop the Indigenous harvest because the Supreme Court ruling also said Ottawa could continue to regulate the fishery, so long as it can justify such a move.

The dispute has escalated into ugly confrontations marked by violence, arrests and allegations of assault and arson.

Amid the rising tension, the First Nation says it can’t sell lobster caught by those taking part in its moderate livelihood fishery in St. Marys Bay or the band’s commercial operation in the Bay of Fundy.

“It’s like we’ve been blacklisted, and we’re just hopeful that we can quickly come to some resolution and expedite getting our lobster to market,” Sack said.

“Pulling our commercial fishery this week and for the upcoming seasons will financially devastate our community,”

A spokeswoman for the First Nation says the 11 boats taking part in the moderate livelihood fishery will continue to haul in their catches from Lobster Fishing Area 34 and put them in storage.

However, Sack said the band’s three boats used for the communal commercial fishery, which were operating in an adjacent area that opened for fishing last week, have been pulled from the water due to “intimidation and market embargoes.”

The chief said the band is looking for a way to sell the catch from the livelihood fishery through a provincial exemption.

The 200 traps were placed in the bay as part of a similar moderate livelihood fishery, which is also operating outside the federally regulated season.

“The seizure of these traps by local officers are without the authorization or authority of their department or the minister,” the Assembly of Nova Scotia Mi’kmaw Chiefs said in a statement.

“This is unacceptable and unlawful.”

The assembly was backed up by the councils from the Potlotek and Eskasoni First Nations, which have demanded the return of seized traps.

As well, the two bands are asking the local community to donate traps for their livelihood fishery, which opened Oct. 1.

This report by The Canadian Press was first published Oct. 21, 2020.