Home » Business » For working Santas, it won’t be a green Christmas as parades, other paid gigs dry up 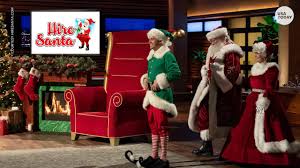 Will there be a Christmas without Santas?

George McKay belts out a hearty “ho ho ho” as he makes the rounds at a weekend farmers market in Brampton, Ont.

Wearing full Santa garb, from tasselled hat to silver bells and with an all-real white beard, the 68-year-old greets children who scamper up before shuffling back when his mask reminds them Kris Kringle has physical distancing protocols, too.

“One little boy asked me last weekend, `Santa, are you OK? Are you going to be able to do the toys this year?’ I said, `Buddy, don’t be concerned. Santa will be there.”’

But COVID-19 precautions mean opportunities to greet the big man in person are dwindling this year. Toronto cancelled its public Santa Claus parade for the first time in its more than 100-year history, and municipalities around the country have done the same.

Retailers scrapped in-store visits, corporate parties are out of the question and hospitals are reconsidering who can safely walk their wards.

That leaves Santas across the country in a state of limbo as organizations mull whether to adapt traditional greeting-and-photo sessions, go virtual or cut the kindly old elf from the advent calendar entirely.

“I’ve been doing Santa for 45 years and I’ve never seen anything like this in my life,” says McKay. “Parades are being cancelled everywhere.” In a typical year he books 100 or 120 events. This year, he’s got about 11.

In the past he says he’s been contracted for events from companies like Coca-Cola and Canadian Tire as well as corporate parties for law firm McMillan, most of which are now off the table.

Private house parties, where his rate runs up to $200 an hour, are also in short supply.

“Normally in the season I’d make around 30 grand. And this year I’ll be lucky if I make five,” he says. “It’s a kick in the teeth.”

The auto shop manager is weighing several mall offers, but says he also has to consider health precautions after a recent battle with cancer.

“We were all bummed out by the fact that we weren’t really even sure if Christmas as we know it was going to come this year,” says Stephen Arnold, a Memphis resident and head of the International Brotherhood of Real Bearded Santas, a U.S.-based industry association that counts a handful of Canadians among its 2,200 members.

“We’re older, most of us are immunocompromised in some fashion.

We have heart conditions, diabetes, breathing problems,” says Arnold, 70. “So we all have to be pretty cautious.”

But hope is on the horizon. Despite “foot-dragging” by malls and retailers, some groups have come forward with creative solutions, he says.

He pointed to Memphis Botanic Garden, which hosts the city’s Christmas tree. It plans to have Arnold perched outdoors in a sled that seats him nearly three metres above the guests.

An upcoming visit to the city’s St. Jude Children’s Research Hospital prompted him to buy a giant novelty snow globe.

“I’ll have a headset and a speaker so I can hear them and they can hear me outside so we won’t have to be shouting through the plastic,” says Arnold, who works part-time as a private investigator.

Toronto’s Eaton Centre will go ahead with its annual Santa meet-and-greet this year, but guests will pre-book and Kris Kringle will maintain a two-metre distance at all times.

Pictures are still planned, but they will be “perspective photos” with Santa in the back and kids or families in front, says Craig Flannagan, vice-president of marketing at Cadillac Fairview Corp. Ltd., which owns the Eaton Centre and 18 other shopping malls across the country. All but two plan to host Santa.

Rather than cancelling entirely, some cities are considering whether to convert their Santa Claus parades into a pandemic-proof alternative.

“We have determined that a parade in the style of previous years is not possible,” says Vancouver parade producer Elyse Gawley. As to what will replace it, “we’re just not sure at the moment.”

Winnipeg is equally uncertain. In Montreal, one option is to plant stationary floats that residents can enjoy throughout the season rather than crowding together on a single afternoon.

“It’s really a difficult exercise, because we’re working with rules that are evolving every week and even every day,” says Emile Roux, who heads the Destination Centre-Ville merchants’ association.

Starting next month, parents still wary of in-person meetings can use screen at home for livestreamed story times and Q&As with Santa as well as private chats, thanks to a major uptick in online options.

“There’s a huge growth in the virtual business,” Arnold says.

He receives US$75 per 15-minute call through the How to Save Christmas platform, though most virtual visits offer less than half that rate, he says.

Video-chat companies such as Talk to Santa employ hundreds of actors who facilitate US$35 live chats, pre-recorded Santa messages and story times. The Welcome Santa site allows them to negotiate their own visits using software from the company, which takes a cut of the proceeds. And mobile apps like Video Call Santa let children liaise with the Arctic bigwig via the comfort of a smartphone.

Talk to Santa, launched in 2014, is anticipating a year “like no other” with an expected increase in business of between 40 and 50 per cent, says CEO John LoPorto.

“Virtual Santa visits had always been a relatively small niche of the annual holiday Santa experience,” he says. This winter, the company is partnering with numerous corporations, stores, apartment complex operators and schools.

Still, all the cancellations and uncertainty are taking a toll on the men in red.

“It’s a financial strain on Santas everywheres,” says McKay from his Brampton home. “A lot of guys are just bypassing the whole year and giving it up.”

As an established Santa with community ties, he considers himself lucky, having garnered nearly 100 requests for FaceTime bookings so far.

“To a lot of the kids out there, Santa’s very, very important,” he says. “Bottom line is, you have to instill the trust and the joy of the season.”

This report by The Canadian Press was first published Oct. 21, 2020.