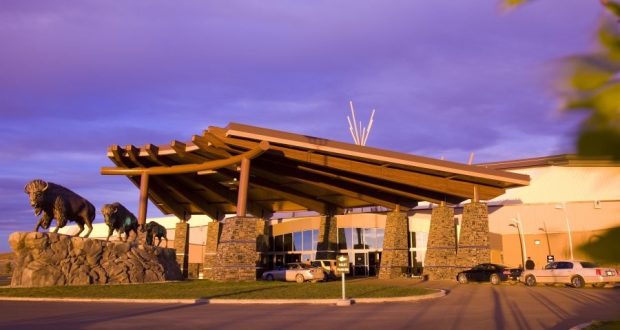 Whitecap Dakota First Nation (WDFN) has wagered on a resort and casino in an uncertain tourism economy.

The $38 million Dakota Dunes Resort and Casino opened on Thursday, touting 155 rooms and large meeting areas that likely won’t reach full capacity until the end of the pandemic.

Featuring design and decor inspired by the First Nation, the new resort is located in the sand dunes about 20 minutes south of Saskatoon. It’s connected to the nearby golf course and includes a fitness centre, an indoor rooftop pool and a hot tub.

WDFN Chief Darcy Bear said the facility could benefit from local tourism, but will likely stay at reduced capacity for some time.

“(While) there’s no international travel right now, … I think a lot of people will be looking for staycations, so we’re hoping this will be one of those places,” he said.

Bear said the casino and resort aims to at least break even in its first year of operations, benefiting from a property tax exemption on the First Nation’s lands while Bank of Montreal doesn’t apply principal interest on financing for six months. He hopes those steps will help the project through its early stages.

As several Indigenous tourism operators struggle, Bear said the new facility is an opportunity to develop infrastructure and economic activity the First Nation has lacked.

Philippe Gadbois, senior vice-president of operations at Atlific Hotels, said the hotel management company had to adjust hiring to reduced demand resulting from COVID-19. The facility employs about a third of its full complement of about 150 staff, but that will likely increase with demand, he said.

“We have to be fiscally prudent right now and we will staff up as revenues climb.”

He expects occupancy to climb to about 60 per cent before the end of August, he said. About 75 of the 155 rooms are ready for guests; the rest should be ready by the end of next week. Floors will open as demand allows.

Some organizations tired of six months of online meetings may opt for small in-person meetings at the resort, Gadbois said, noting the facility expects some of the first groups shortly. At its peak, the facility’s 10,000 square feet could accommodate up to 800 people, he said.

Rob Harvey, regional director of Indigenous Services Canada, noted the project has been in development for more than a decade.

When it broke ground in 2018, ISC had contributed about $8.6 million through its Community Opportunity Readiness Program.

“The employment opportunities and the sustainability of it are a huge factor in supporting the hotel,” he said.

First Nations, not only in Saskatchewan but across Canada, are seeing that during this pandemic where things have slowly halted with the economy, progress can still can happen,” said Federation of Sovereign Indigenous Nations Chief Bobby Cameron.