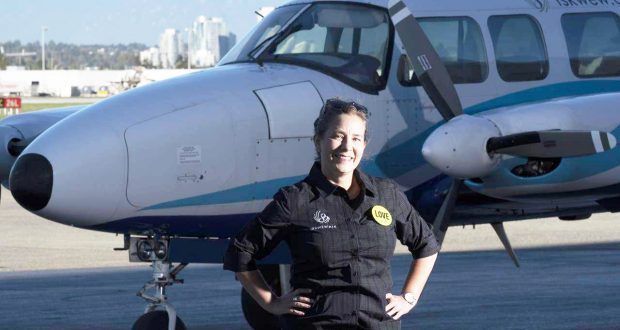 Teara Fraser, commercial pilot and owner of Iskwew Air,  in front of her plane on the tarmac at Vancouver International Airport in Richmond, B.C., Tuesday, September 29, 2020. THE CANADIAN PRESS/Jonathan Hayward

TORONTO- Not all heroes wear capes, as the saying goes, but Teara Fraser does have her wings and likes to fly — with a social purpose. 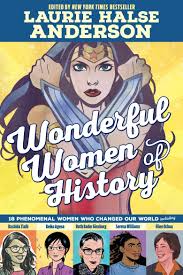 Author Laurie Halse Anderson edited “the anthology of Wonder Women,” which has different writers and illustrators for each profile.

“I feel completely in awe of that, but I suppose what I want is to acknowledge that there are real superheroes working at the grassroots levels, and that everyone has their own unique superpowers,” Fraser said.

“There are everyday superheroes that are working hard to co-create a better world, one that serves all peoples.”

Iskwew (pronounced IS-KWAY-YO) is a Cree word for woman. Fraser chose the airline name as an act of reclamation of matriarchal leadership, language, and womanhood in a male-dominated industry, she said.

The company also wants to create a sense of belonging for all people, Fraser added.

“It’s important to me to uplift all those identifying as women and non-binary folk and Indigenous peoples.”

Aviation is a field the 49-year-old Fraser didn’t consider until she was 30. That’s when she took her first flight on a small plane, on an aerial tour over the Okavango Delta in Botswana, and the pilot told passengers stories of the land and animals.

“I was like, ‘That guy has got the coolest job ever,” she recalled. “And I came down from that flight thinking, ‘Wouldn’t that be amazing? What if I could do what that guy is doing?’

Obviously I’m biased, but witnessing the land in such a sacred way, like a bird witnesses the land, is so powerful.”

When she returned home, Fraser got her commercial pilot’s licence in less than a year, which opened up her world to more possibilities beyond her previous career of various entry-level jobs.

In 2010 Fraser began her Master of Arts in Leadership degree from Royal Roads University and started her first business — KISIK Aerial Survey Inc. — which she sold in 2016.

It was also in 2010, while observing visitors flocking to Vancouver for the Winter Olympics, when Fraser thought of the idea for Iskwew Air. She wanted to uplift Indigenous tourism, serve Indigenous peoples and communities, and showcase Indigenous peoples throughout the province.

The self-described “systems disrupter” and “bridge builder” also wanted her industry “to think differently about diversity, and inclusion and belonging,” she added.

“I wanted to create a space both for myself and for other people where we can be our whole selves — love is one of our articulated values, and we wear love buttons — and a place where we can energize humanity.”

Fraser did a ceremony asking the Musqueam people for their blessing to do business on their territory with Iskwew Air in September 2018.

The company flies out of Vancouver International Airport, which Fraser says is the unceded territory of the Musqueam people.

So far the company offers chartered services throughout B.C. with five employees and one plane — a twin-engine PA31 Piper Navajo Chieftain — which can hold eight passengers.

“Iskwew Air is a humble start with a big vision,” said Fraser, who established the Aviation Leadership Foundation in 2008 and has been involved in various roles at the British Columbia Aviation Council.

Like the pilot in Botswana, Fraser feels it’s important to acknowledge the land that they’re leaving from, flying over and guests on. She shares stories with passengers as appropriate.

“We just connect people however we can with the land, because through that connection comes care,” she said.

The aviation industry is reeling from the COVID-19 pandemic, but Fraser remains determined and is still operating. The company has also been delivering care packages to Indigenous communities that welcomed them.

“As an Indigenous woman-owned business, literally it’s just as simple as Iskwew Air must survive this economic and social crisis,”

she said. “I plan to look back on this time and say, ‘Remember when I tried to start up an airline, and then COVID hit and I didn’t know if I would make it? And then I did. I made it.’ That is the story that I’m determined to have.”

At the same time, Fraser is working on a PhD in human development. Coincidentally, she’s studying a topic that also speaks to Wonder Woman and the DC Comics “Wonderful Women of History” list: the concept of warriorship.

And in my view, what matters right now is ecological, social, racial, and economic justice, and Indigenous sovereignty.”

This report by The Canadian Press was first published Sept. 30, 2020.