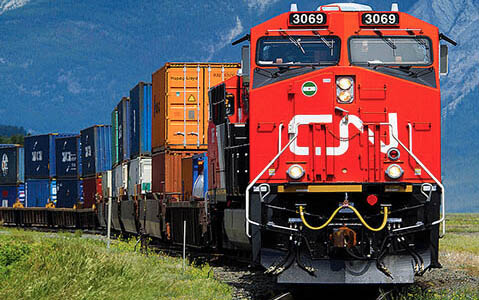 Carloads fell more than 17 per cent year over year last week, part of a growing decline in shipments since the start of the year and accelerated by the COVID-19 pandemic, according to the Association of American Railroads.

“There is no question in our mind that freight volumes in the next few months are going to be severely depressed with no real historical precedent,” he said.

Automotive shipments and container traffic have been hit particularly hard after North American and Asian production hubs went into lockdown due to the virus.

Year over year, auto and container volumes decreased by more than 15 and 12 per cent respectively in March, with container traffic seeing its steepest plunge since 2009. CN carloads of vehicles and auto parts fell 90 per cent last week, while CP’s dropped 76 per cent.

Nonetheless, the two railways remain fully operational with stock prices roughly 15 per cent below February highs, a shorter fall than that of many transportation industry companies.

They have responded to lighter demand by parking train cars at strategic spots across the country, hoping to pounce on a rebound in the third quarter. CN announced in November it planned to lay off 1,600 employees, with CEO JJ Ruest saying last month that more cuts could be coming as global supply chains wobble.

“They already announced they were rightsizing and downsizing _ so I don’t think the railways are being caught off guard. They were already taking actions months ago,” said Amaury Baudouin, vice-president of credit ratings at DBRS Morningstar.

Canada is staring down a 2020 economic contraction of 6.2 per cent, according to an International Monetary Fund forecast Tuesday, and railways are far from immune to downward global trends.

“More than any other business, transportation can’t create its own demand, so they are truly beholden to macroeconomic activity, and industrial production more specifically,” said Deutsche Bank analyst Seldon Clarke.

“Auto production is just completely shut down. You see a lot of these U.S. auto producers repurposing facilities to make masks and things like that,” he said in a phone interview. “No one’s really going out to buy a car right now.”

Container volumes promise to ramp back up as production resumes in China, but consumer demand at home may sink given the “near-term downturn will be the sharpest on record,” according to estimates from a Bank of Canada report Wednesday.

The plunge in oil prices and manufacturing mean crude by rail and metal shipments are also poised to fall, said Baudouin.

The trend toward grocery hoarding along with restaurant shutdowns has heightened the need for supermarkets to restock shelves quickly.

“In order to achieve that the trucking sector can be more efficient than rail…so along with a lower fuel price, from a shipping perspective trucking is more compelling right now.”

Some provinces and states have halted residential and commercial construction or new home builds, lessening the demand for forest products, which saw six per cent less volume shipped along Canadian tracks last month.

While the length of a recession remains uncertain, analysts believe the second quarter will be the worst one for railroad operators _ which “are usually a reflection of the broader economy,” Baudouin said.

“You’re stuck in your house in April and May,” Clarke said.

“It’s tough to get much worse than that.”

This story by The Canadian Press was first published April 15, 2020.

Companies in this story: (TSX:CNR, TSX:CP)