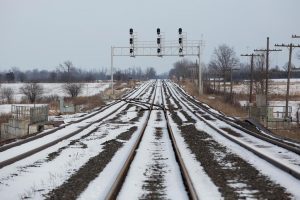 MONTREAL- Sectors from retail to oil and gas are calling on governments to resolve a dispute with anti-pipeline protesters as a rail blockade enters its ninth day, extending railway shutdowns and threatening shortages of groceries, chlorine for drinking water, propane and other products.

Demonstrators set up a blockade near Belleville, Ont., on Feb. 9 in support of opponents of the Coastal GasLink pipeline project that crosses the traditional territory of the Wet’suwet’en First Nation in northwestern B.C.

Retail Council of Canada spokesman Karl Littler says fresh food, personal hygiene products and baby formula are among the goods that could soon go missing from store shelves, as halted railcars in the eastern half of the country clog CN’s network from coast to coast.

Canadian Federation of Agriculture president Mary Robinson says the backed-up rail lines are hampering producers’ ability to export commodities, warning of what she calls “huge financial consequences” as farmers do not get paid until products get to market.

Industries from manufacturing to fertilizer say they respect the right to peaceful protest but say it’s time for federal and provincial governments to bridge the impasse or enforce injunctions obtained by CN.

This report by The Canadian Press was first published Feb. 14, 2020.