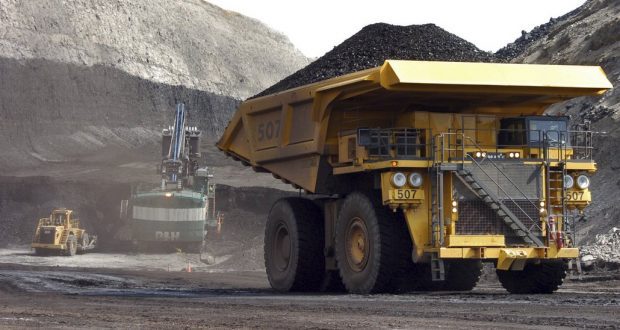 (Matthew Brown | AP file photo) In this April 4, 2013 file photo, a truck carrying 250 tons of coal hauls the fuel to the surface of the Spring Creek mine near Decker, Mont. The mine has been indefinitely shuttered by its new owners from the Navajo Nation in a dispute over whether it should be immune from some environmental regulations.

Navajo company shuts coal mine in dispute over sovereignty

BILLINGS, Mont.- One of the largest coal mines in the U.S. was indefinitely shuttered Thursday in a dispute over whether its new owner should be immune as a tribal entity from future lawsuits for environmental violations or reclamation costs.

The Navajo Transitional Energy Company blamed the state of Montana for the impasse over the Spring Creek Mine near Decker. Its executives said they were standing up for the company’s sovereign rights as an entity wholly-owned by the Navajo Nation.

State regulators contended it was the company’s decision to shutter the mine. They said the state had been open to a short-term waiver of immunity so mining could go on while negotiations continued.

But officials also made clear the company would not be approved to run the 275-worker mine over the long-term without a waiver of immunity.

“NTEC (Navajo Transitional Energy Company) will not operate Spring Creek until such a fully-effective, complete and approved waiver has been agreed upon,” wrote Matthew Dorrington, coal program supervisor at Montana’s Department of Environmental Quality.

The main area of disagreement between the state and company is a Montana law that allows citizens to file lawsuits over alleged violations of reclamation rules, according to the letter.

NTEC chairman Tim McLaughlin said in a statement that the company has “done everything in our power” to assure Montana officials that it would operate under state laws.

“But we simply cannot consent to a full waiver of the rights preserved in our treaties,” McLaughlin added.

The company is owned by the Navajo Nation but operates independently. It recently bought Spring Creek and two Wyoming mines at auction following the bankruptcy of former owner Cloud Peak Energy and took control of the mines this week.

Spring Creek is one of the largest coal mines in the U.S. It produced almost 14 million tons (12.7 million metric tons) of the fuel in 2018 for domestic power plants and shipment to customers in Asia, according to federal data.

The Cloud Peak deal made the Navajo the third-largest coal producer in the U.S.

Its mining company also operates the Navajo mine near the Arizona-New Mexico border that serves the nearby Four Corners Power Plant. The plant is one of three in the region that are scaling back operations as utilities shift toward natural gas and renewable energy sources.

Department of Environmental Quality spokeswoman Rebecca Harbage declined to release further details on what kind of immunity waivers were being sought. She cited the ongoing negotiations.

“We’re trying to figure out what a limited waiver would look like, so they can continue with full production and they are adhering to environmental laws,” Harbage said.