Several artists are pulling support for the Indigenous Music Awards over concerns about cultural appropriation of Inuit throat singing. 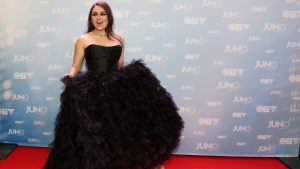 Tanya Tagaq poses on the red carpet during the 2015 Juno Awards in Hamilton, Ont., on Sunday, March 15, 2015. (Peter Power The Canadian Press)

Tanya Tagaq, Kelly Fraser and Iva are among the musicians who posted to social media pledging not to participate in the awards until the organization revises its policies or includes Inuit representation on its board.

The throat-singing duo PIQSIQ, comprised of Inuksuk Mackay and Tiffany Ayalik, say they are withdrawing the nomination of “Altering The Timeline” for best electronic music album.

The Yellowknife-raised sisters say their decision was spurred by the IMA’s nomination of a non-Inuit artist who performs throat singing, but declined to name the musician to keep the focus on the issue of appropriation between Indigenous groups.

Mackay and Ayalik say they and other members of the throat-singing community worked “quietly” in recent weeks to resolve the issue with the artist and IMAs, but have yet to see any action.

A spokesman for the IMAs did not immediately provide comment. The awards ceremony is set to be held in Winnipeg on May 17 as part of the annual Manito Ahbee Festival.