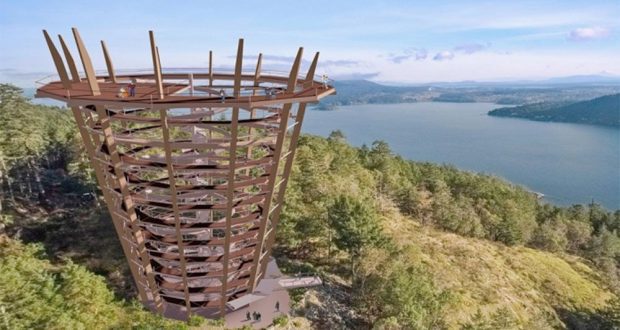 VICTORIA- A BC tourism company is partnering with a Vancouver Island First Nation on a plan that could see a major development at the peak of the winding, steep and sometimes narrow route connecting the Greater Victoria area to the Cowichan Valley.

The proposed Malahat Skywalk would be built at the 356-metre summit of Malahat Drive.

It would feature a 600-metre long, 20-metre high elevated wooden walkway, leading to a spiral tower 40 metres above the ground, offering expansive views of the Saanich Inlet and Finlayson Arm.

Trevor Dunn of Aspire by Nature says the skywalk would attract travellers to stop at the summit of the highway, walk above the woods and enjoy the view.

He says work on an approval process is underway, a rezoning application has been submitted to the Cowichan Valley Regional District, and public consultations are planned.

Developers hope to begin construction this fall and expect to have the project open in the spring of 2020.

Dunn says the location would be appealing for a “world-class tourism experience.”

“You see the ocean, you see the islands, you see a really neat arbutus forest. That’s the first thing. Secondly, it’s got a long, deep history of First Nations culture, and the Malahat Nation’s been a great inspiration for us,” he says.

Dunn also notes the development would be located next to the extremely busy Malahat Drive, which is the only link between the Victoria area and the rest of central and northern Vancouver Island.

He says the project would include First Nations art and culture and offer scholarship opportunities to the Malahat Nation so its members could be involved in the tourism industry. (CFAX)