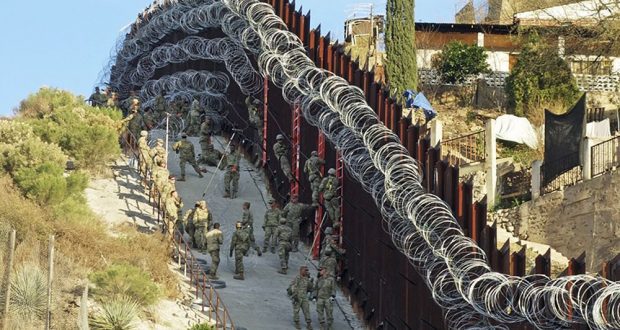 NOGALES, Ariz.- Officials in a small Arizona border city are decrying the installation of new razor wire that now covers the entirety of a tall border wall through downtown.

The city council in Nogales, which sits on the border with Nogales, Mexico, is set to consider a resolution Wednesday night condemning 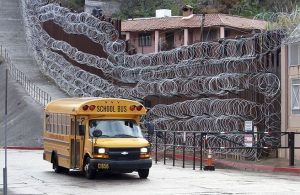 the use of concertina wire. It follows reports that U.S. troops installed more horizontal layers of the wire along the border fence over the weekend.

The vote also comes one day after President Donald Trump made his case to the American people about the need for a border wall to protect the nation and how he has ordered 3,750 troops to prepare for what he called a “tremendous onslaught.”

Concertina wire has become the most visible sign of Trump’s deployment amid anxieties about a Central American caravan around the time of the midterm elections.

Soldiers have installed concertina at or near several official crossings at the border. In late November, U.S. Customs and Border Protection said the military had sent 36 miles (58 kilometres) of concertina for use in California, Arizona, and Texas.

At the start of November, soldiers in Texas installed lines of wire coils below a major bridge near McAllen.

Nogales, a city of about 20,000 people, is a fraction of the size of its Mexican counterpart, but its economy is largely reliant on Mexican shoppers and cross-border trade. Illegal crossings in that area have dropped steeply in the past several years.

Mayor Arturo Garino told the paper that he asked U.S. Sen. Martha McSally to help the city have the wire removed during a visit to the border last month.

A spokeswoman for McSally said the senator was working on a response to an inquiry from The Associated Press.

The mayor said authorities didn’t tell him why more wire was installed.

He said he was most concerned that children and others could be injured now that it reaches the ground. The downtown area is also residential, and there are homes that stand a few feet from the border fence.

“esthetically pleasing _ it’s not. It’s very bad. It’s not good for business, it’s not good for what we’re trying to create, a business-friendly community here in Nogales,” Garino told the AP.

U.S. Customs and Border Protection and the Department of Defence did not respond to inquiries about why additional wire was installed last weekend.

City leaders were critical of military exercises at the border during the holiday season, saying they believed it scared shoppers.

The resolution the city council is scheduled to vote on says concertina wire is typically something found in battlefields, and that placing it along the border fence is “not only irresponsible but inhuman.”

In a tweet, U.S. Rep. Raul Grijalva, a Democrat, called its placement a stunt by the Trump administration, which he said is “trying to create the perception of rampant lawlessness and crime.”

The Nogales measure would be one of the more direct swipes against one of Trump’s signature initiatives. In September 2017, the San Diego City Council adopted a resolution that said Trump’s walls would be “damaging symbols of fear and division that will increase tensions with Mexico, one of the United States’ largest trading partners and a neighbour with which communities such as San Diego in the border region are inextricably linked culturally, physically, and economically.”

It said Trump’s proposal “could destroy the vitality of U.S.- Mexico relations and act as a separation to our unique, diverse, and beautiful region.”

The San Diego resolution passed 5-3, with Democrats in favour and Republicans opposed. Kevin Faulconer, the city’s Republican mayor didn’t back the statement but didn’t veto it either. The mayor often says the U.S. should focus on building bridges instead of walls.

Other border mayors have also been critical.

“We have a fence here. The fence is fine. It does what it’s supposed to do,” Dee Margo, the Republican mayor of El Paso, Texas, said last year. “I hear the term wall, I think of the Berlin Wall.

I think it’s pretty detrimental to the relationships that have lasted more than 400 years.”

The number of arrests by the Border Patrol is the lowest since the early 1970s, while the number of agents has more than doubled.

Over 1.6 million arrests were made by just about 9,200 agents nationwide in the 2000. But those figures tapered off as the government dramatically increased staffing and resources like more surveillance technology and tall, steel fencing.