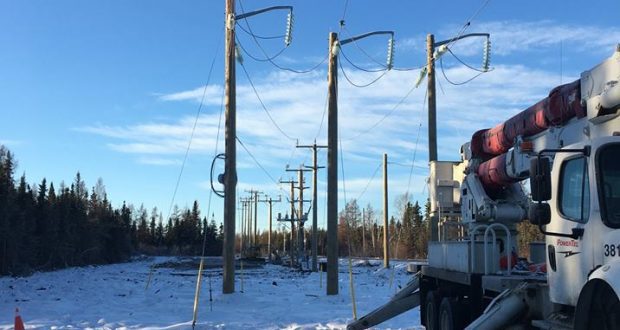 Pikangikum First Nation, more than 200 kilometres north of Kenora, Ont., joined the grid Dec. 20 as the transmission lines to the provincial grid were energized. (Supplied photo)

Wataynikaneyap Power says Mishkeegogamang and Ojibway Nation of Saugeen have legally joined the project, bringing the total number of communities who are equal owners to 24.

The news comes just under a month after the first of 17 remote First Nations was connected to the power grid.

The diesel generating station in Pikangikum First Nation, more than 200 kilometres north of Kenora, Ont., was shut down Dec. 20 as the transmission lines to the provincial grid were energized.

The Wataynikaneyap Power Transmission Line Project launched in 2015, with a plan to connect the remote communities to the grid over an 1,800-kilometre transmission line.

The full project is expected to be completed by 2023, and will shift the communities from dependence on diesel fuel for power to the provincial electricity grid.

“I am very pleased to say that Wataynikaneyap’s engagement and discussions have resulted in an even stronger partnership of 24 First Nations who have agreed to work together to connect the 17 remote First Nations to the grid,” Wataynikaneyap Power CEO Margaret Kenequanash said in a statement.