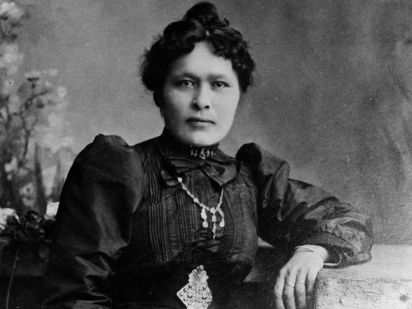 WHITEHORSE- An Indigenous woman is being inducted into the Canadian Mining Hall of Fame for the first time.

Kate Carmack of Yukon will be recognized as one of the handful of prospectors whose discovery of placer gold set off what the hall of fame describes as “one of the world’s greatest gold rushes” in the Klondike more than a century ago.

In 1999, the organization recognized four men who were known as the Klondike Discoverers by inducting them into the hall of fame for locating the site where the gold was found on Rabbit River in 1896.

But the president of Yukon Women in Mining says many stories also say Carmack may actually have found the first gold nugget while fishing with her family.

Anne Turner said Carmack was “missed” in the first round of recognition but it’s “really exciting” that she is finally being honoured.

Carmack is the third woman to be inducted into the hall, joining 1991 inductee Viola MacMillan, a mine finder and financier, and early 1900s Manitoba prospector Kathleen Rice, who was inducted in 2014.

The hall of fame description of Carmack’s contribution says her traditional knowledge and skills supported her husband, Mason and Charlie during years of less productive prospecting.

“Specifically, (Carmack’s) ability to sew and market her mukluks and mittens to fellow prospectors provided the means to support their work,” the hall writes.

When the first four Klondike Discoverers were inducted in 1999, the hall said Henderson had tipped off the other three.

“I think it demonstrates that the foundation of Yukon’s mining industry came with women and with Yukon First Nations at the table right out of the gate,” she said.

Yukon Women in Mining has also named an award in Carmack’s honour. Tara Christie, president and CEO of Banyan Gold, was the first recipient of the Kate Carmack Women in Mining Award in November.

The rush brought 30,000 prospectors to the Klondike gold fields in just two years as prospectors flooded north, hungry to repeat the bonanza of the 1849 California gold rush.

“The Klondike rush opened up the North, as well as Canadians’ eyes to its possibilities,” the hall of fame says.

“An active placer mining industry continues in the Yukon today and some of its miners are the descendants of the men and women who joined the Klondike rush a century ago.”