Tired of waiting for major construction projects to come to them, a growing coalition of First Nations is instead taking the lead on ventures to better control their economic futures.

“We really are in a place looking to diversify our economies,”said Jasmine Thomas, a councillor of the Saik’uz First Nation in central British Columbia.

“Really moving away from projects proposed and imposed on us, and changing that whole direction to projects that we’re leading, and that make sense to us.” 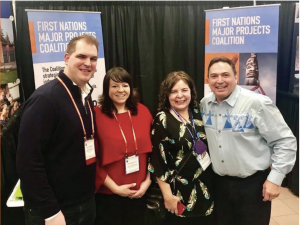 The Saik’uz are one of four bands working with an initiative called the First Nations Major Projects Coalition to jump-start a hydroelectric enterprise that has been stalled for decades.

The roughly $300-million Kenney Dam Water Release Facility is the first project the coalition has taken on in its mission to create a First Nation-led service providing trusted advice and co-ordination on getting major projects off the ground.

“We are a first-of-its-kind model,” said Niilo Edwards, executive director of the coalition.

“What we do is we respond to the requests that come in and provide the support necessary so that communities can make informed business decisions.”

The coalition, currently funded from provincial and federal grants, is designed to move beyond impact benefit agreements towards greater initiative and ownership of projects with budgets of over $100 million, said Edwards.

“In this day and age, First Nations have the opportunity to become project proponents themselves. Gone are the days of treating First Nations as stakeholders. They are governments, they have interests in their territory, they have economic and social interests that need to be satisfied.”

To help First Nations get projects going, the coalition provides a forum for discussions and consultations as well as expertise, but it is not a project manager, nor does it negotiate on behalf of First Nations.

The Kenney Dam project is the most advanced for the coalition, but Edwards said he has received requests to look into electricity transmission projects as well as the potential for a provincial loan guarantee fund.

The coalition, which started taking shape in B.C. in 2015 and now counts 47 members as far east as Ontario, is also framed around projects that meet standards of cultural values and environmental stewardship and to demonstrate how projects can move forward with free, prior and informed consent.

The Kenney Dam project looks to have met the criteria of the Saik’uz, Nadleh Whut’en, Stellat’en, and Cheslatta Carrier First Nations involved in moving it forward. The project will direct overflow water from the dam to a generation facility, and restore water flow to a stretch of the Nechako river that was choked off when the dam was built in the 1950s to power the Rio Tinto Kitimat aluminum smelter.

The project has been proposed in various forms for decades, but never got off the ground. The coalition, along with independent power producer BluEarth Renewables Inc., is now advancing it through a new feasibility study with the hope of finally making it a reality, said Edwards.

“This project was on the books for 20 or 30 years, and the First Nations who have an interest in it today, struggled to advance the project until the coalition came along and was able to act as a forum for capacity and technical support to make the project go, or at least as far as we’ve gotten it today, which is a heck of a lot further than it’s ever been.”

BluEarth CEO Grant Arnold said the project itself fit key criteria for the company, but that the coalition has helped smooth out the process.

“It’s a really impressive way for these groups to build capacity, and to get involved in large projects,” he said.

“The model in Canada is evolving very very quickly, and to the benefit of everybody, including First Nations, project developers, there’s a lot of positive trends.”

For Thomas, who acts as a spokeswoman for the four First Nations involved in the Kenney project, the development and the coalition in general are part of a new era for First Nation independence.

“We’re talking about a new political landscape,” she said.

“Having First Nations lead these type of projects, major projects, risks are definitely reduced. There’s a lot of economic certainty and it’s really helping to promote economic reconciliation for communities.”