Canada’s ambassador to U.S. tries to head off concerns about oil output cut

WASHINGTON- Canada’s ambassador to the United States says he has done some pre-emptive diplomacy with the Trump administration on Alberta’s plans to force output cuts on its oil industry. 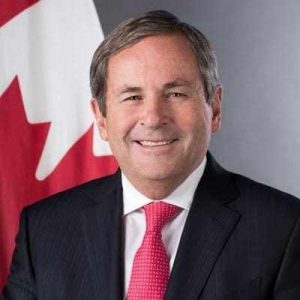 David MacNaughton says no one in the U.S. government has raised Alberta Premier Rachel Notley’s move with him.

Still, MacNaughton says he has reached out to his counterpart Kelly Craft to emphasize the cuts are only temporary and that Canada does not feel they violate existing free-trade rules.

Notley has ordered a mandatory 8.7 per cent cut in oil production to reduce a glut of Alberta oil that is forcing steep price discounts.

MacNaughton notes the production cuts are not universally loved within the industry and some unhappy players are likely in the ear of the U.S. administration.

He says he wants to make sure Craft is informed on the issue.

“It’s always better to make sure the facts are on the table,” MacNaughton said Tuesday.  “She was very receptive. I was at her Christmas party on Sunday night so we had a good chance to chat about it.”

The Trans Mountain pipeline expansion project, which would triple capacity to the B.C. coast, is now in legal limbo despite being approved two years ago as Ottawa revisits the impacts on First Nations and B.C.’s marine environment.

MacNaughton says he also noted for Craft that getting the Keystone XL pipeline finally approved through the U.S. would also help with Alberta’s problems.

That project, too, has been tied up in the courts.