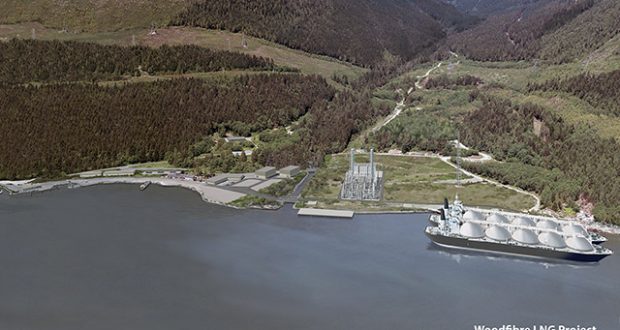 The proposed Woodfibre LNG plant, will be accessible only by boat. It is seven kilometres from downtown Squamish, B.C. (Woodfibre LNG photo)

SQUAMISH, B.C. -The Squamish Nation has approved economic benefit agreements for Woodfibre LNG, a project worth up to $1.8 billion in British Columbia’s Howe Sound.

The approval of the agreements by an eight to six vote means the First Nation could receive cash and contract benefits worth almost $1.1 billion. 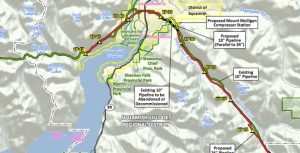 Woodfibre LNG is licensed to export about 2.1 million tonnes of liquefied natural gas a year for the next 40 years from a former pulp mill about seven kilometres south of Squamish.

The First Nation says in a news release the agreements include annual and milestone payments totalling about $226 million, a cultural fund and cash for employment opportunities.

It says the agreements also mean the Squamish Nation and member-owned businesses could be awarded up to about $872 million in contracts, but only if they are fully qualified to win the bids.

Squamish councillor Khelsilem says it was a difficult decision for many in the community.

“The next steps will be holding the proponents accountable for the life of the project and beyond; that includes the construction, operation and eventual decommissioning of Woodfibre LNG.”

The First Nation says it will help develop management plans for the project and will have its own monitors to report any non-compliance with environmental, cultural, employment and training requirements.

The deals also mean nine parcels of land would be transferred to the Squamish Nation for housing and economic development along with five cultural leases in Howe Sound.

In a statement issued Friday, the company says it has already received environmental approvals from the federal, provincial and Squamish Nation governments.

Byng Giraurd, vice-president of corporate affairs at Woodfibre LNG, says it is pleased to have fulfilled another key condition of the project.