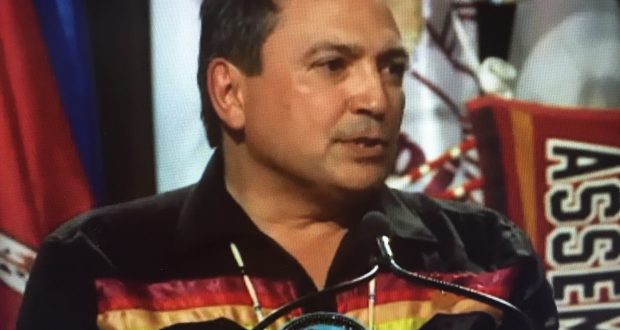 “I have consistently urged Minister Freeland to ensure the protection of inherent and Treaty rights in international trade and I am pleased this is included in the newly announced United-States-Mexico-Canada Agreement,” said AFN National Chief Perry Bellegarde. “The provisions addressing Indigenous Peoples in the USMCA make it the most inclusive international trade agreement for Indigenous peoples to date. The protection for Indigenous peoples’ rights in the general exceptions to the agreement will protect inherent, Aboriginal and Treaty rights as well as increase stability, certainty and integrity to international trade.”

Some highlights of the United States-Mexico-Canada Agreement include recognition of the important role First Nations and other Indigenous peoples play in the long-term conservation of the environment, and emphasis on cooperation activities to promote and enhance opportunities for First Nations businesses and trade. Specific provisions for Indigenous peoples are found in the Exceptions and General Provisions chapter, the Environment chapter, Investment chapter (corporate social responsibility), Textiles, Small and Medium Sized Enterprises Chapter and Competitiveness Chapter.

“I strongly remind Canada, the United States and Mexico that with their endorsement of the United Nations Declaration on the Rights of Indigenous Peoples comes domestic obligations to Indigenous peoples, and that rights protected in the new agreement must include the rights and obligations in the Declaration,” said National Chief Bellegarde. “I will continue to urge Canada to work in partnership with First Nations to ensure recognition, protection, implementation and enforcement of First Nations rights in this agreement and other international trade and investment agreements.”

In January 2018, National Chief Bellegarde and a delegation of First Nations leaders, including members of the AFN Chiefs Committee on Economic Development, were in Montreal to discuss the importance of trade to First Nations economic growth, participation in the labour force and inter-tribal trade and to push for an Indigenous Peoples Chapter in the agreement.

National Chief Bellegarde was approached in July 2017 to participate on the NAFTA Council to offer advice to federal Minister of Foreign Affairs Chrystia Freeland during negotiations.