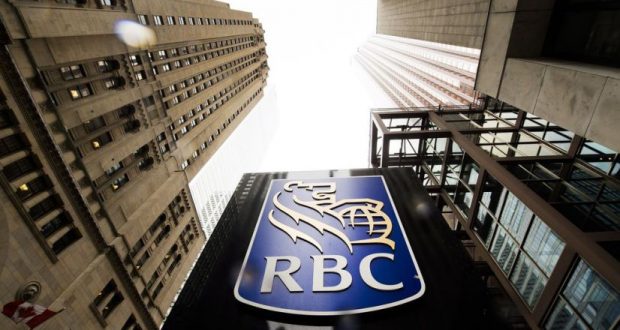 A Royal Bank of Canada sign is shown in the financial district in Toronto on Tuesday, August 22, 2017. NATHAN DENETTE / THE CANADIAN PRESS

TORONTO- Royal Bank of Canada set the tone for the latest round of big bank earnings with a dividend hike and profits and revenues in the latest quarter, helped by higher interest rates and mortgage growth.

Canada’s biggest bank by market capitalization delivered a record $3.1 billion in net income for its fiscal third quarter, up 11 per cent from a year ago.

The bank’s results, which beat analyst expectations, were driven by earnings growth in its wealth management, capital markets and personal and commercial banking divisions.

“We’ve been investing to grow organically on our key markets and our investments are paying off,” he said on a conference call with analysts on Wednesday. “All of our large businesses saw strong earnings growth in the third quarter and we had market share gains in our core franchises.”

The Toronto-based lender’s diluted earnings per share for the three-month period ended July 31 was $2.10, up 14 per cent from $1.85 per diluted share a year ago.

Royal Bank was the first of Canada’s six biggest banks to report its third-quarter financial results this year. The Canadian Imperial Bank of Commerce reports its results for the period on Thursday, followed by the other banks next week.

“Royal kicked off earnings season with higher than forecast earnings and a dividend increase that was twice as much as expected,” said John Aiken, an analyst with Barclays in Toronto.

The bank demonstrated strong cost containment, and “impressive” results in both domestic retail and U.S. wealth management, including a strong contribution from Los Angeles-based City National, Aiken said in a note to clients. RBC acquired City National in 2015.

The bank’s residential lending portfolio was $279 billion at the end of the quarter, up from $268.7 billion a year ago, despite lingering concerns over the impact of tighter lending rules for uninsured mortgages introduced on Jan. 1.

Under the revised rules, homebuyers with a more than 20 per cent down payment must prove they can service their mortgage if interest rates rise, an additional hurdle which the country’s real estate association says has been weighing on the housing market.

“We’ve seen a healthy normalization in Canadian housing and our mortgage portfolio continues to grow,” he said on the conference call.

Under the revised mortgage underwriting rules introduced this year, homeowners looking to renew their uninsured mortgage are not subject to the new stress test if they stick with their existing provider, hobbling their ability to seek out a more competitive rate.

As well, the bank’s net interest margins, or the profit made on loans at its domestic arm rose by 13 basis points on the back of four increases to the Bank of Canada’s trend-setting interest rate this year.

Net interest margins are the difference between the money banks earn on the loans they make and the interest they pay out to savers.

“We were expecting to see customers be a little bit caught off guard and our frontline sales advisers really aren’t sharing that,” he said on the conference call. “The customers are thinking about either extending … if they need to manage the payments on mortgages, they’re thinking about frankly just buying less expensive homes and actually moving down.”

The bank’s insurance and investor and treasury services divisions, however, saw net income decrease by two per cent and 13 per cent, respectively, to $158 million and $155 million. The bank cited factors including increased costs to support growth for the drop in net income.