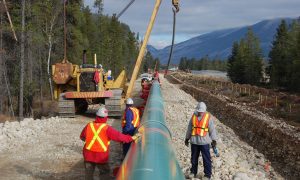 Canada and an American energy company want a First Nation in British Columbia to pay for their legal fees following ‘significant’ delay and prejudice to a stalled pipeline expansion project.

A lawyer for Texas-based Kinder Morgan made this request in a newly-released court submission from May 14 that was sent to the Federal Court of Appeal. Counsel for Canada’s Attorney General, Jody Wilson-Raybould, made a similar request in a separate submission on May 11.

The submissions were responding to an extraordinary motion submitted on May 2 by the Tsleil-Waututh Nation, requesting that the court compel the government to release uncensored copies of federal documents cited in a recent investigation by National Observer,

including the release of new secret cabinet documents.

The National Observer investigation quoted internal documents and unnamed public servants who said that Prime Minister Justin Trudeau’s decision to approve Kinder Morgan’s Trans Mountain project was rigged. The documents and information released by whistleblowers show how a high-ranking official instructed public servants to find a way to approve the project, even though the government was supposed to be consulting and accommodating First Nations at that time. More at : https://www.nationalobserver.com/2018/05/16/news/canada-and-texas-energy-company-want-first-nation-pay-their-legal-fees-over-stalled