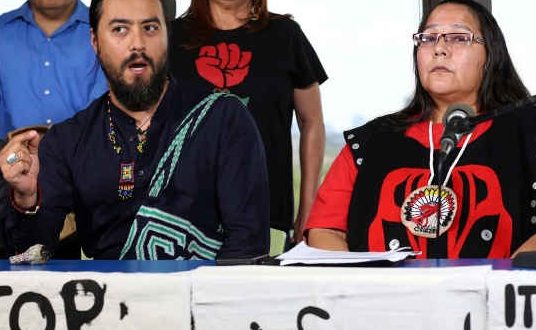 HOUSTON -Environmental and First Nations groups say shareholders at Kinder Morgan’s annual general meeting voted for a resolution today for greater sustainability disclosure after a presentation made by a chief from British Columbia.

Neskonlith Chief Judy Wilson says she told the meeting in Houston that environmental, social and governance issues can pose significant risks to business and without proper disclosure, shareholders won’t know if they are vulnerable to those risks.

After making her proposal, Wilson says shareholders asked questions about Indigenous policy and she told them she believes the pipeline builder is violating them.

Lisa Lindsley with advocacy group SumOfUs says the proposal is not binding on Kinder Morgan, but they’re hopeful shareholders will follow up with the company.

The groups say more than 50 per cent of shareholders supported the resolution.

The federal government has approved Kinder Morgan’s plans to expand its Trans Mountain pipeline from Edmonton to Burnaby, B.C., but Wilson says First Nations have not given their consent for work on their lands.