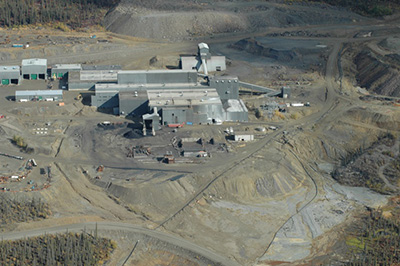 Federal government takes control of abandoned zinc mine in Yukon

WHITEHORSE -The Federal government has taken control of cleaning up a lead and zinc mine in Yukon, 20 years after the former operators declared bankruptcy and abandoned the site.

He says Parsons Corp., the company that has been managing site, has a contract to continue its work until April 2020.

Mead says a two-year, $100-million construction project will begin this summer to better manage water in the area, collecting and treating contaminated water and diverting away clean water.

The mine operated on the 25-square-kilometre site in south-central Yukon for nearly 30 years before Anvil Range Mining Corp. went bankrupt and walked away from the site in 1998.

Indigenous and Northern Affairs Canada says the operations left behind 70 million tonnes of tailings and 320 million tonnes of waste rock, which have the potential to leach heavy metals and acid into the surrounding land and water.

At one time, the mine was the largest open-pit lead and zinc mine in the world. The department says the mining waste left behind could be spread a metre deep across 70 football fields.

The federal and territorial governments have been working with First Nations in the area to first make the site safe for humans and wildlife in the area, before restoring the land as much as possible.

Work to remidiate the mine is set to begin in 2022.

“One of the challenges at Faro is the size and scale,” he says.

“We’ve got a very large site, a significant amount of waste materials which does add a level of complexity that you might not see on smaller sites or more contained sites.”

Government documents from 2013 assessed the cost to clean up the site at $590 million.