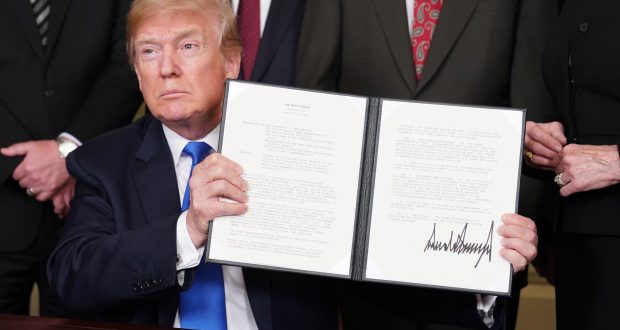 US President Donald Trump signs trade sanctions against China on March 22, 2018, in the Diplomatic Reception Room of the White House in Washington, DC, on March 22, 2018. Trump will impose tariffs on about $50 billion in Chinese goods imports to retaliate against the alleged theft of American intellectual property, White House officials said Thursday. / AFP PHOTO / MANDEL NGAN/AFP/Getty Images)

‘What keeps me up at night’: Trump’s trade czar explains hawkish moves on China

WASHINGTON- It was President Donald Trump who announced a broad trade offensive against China on Thursday, with wide-ranging tariffs, an international lawsuit and investment restrictions to combat alleged theft of Americans’ intellectual property.

It was his trade czar, however, who made the most elaborate argument for them.

As stocks were sent sputtering by the prospective clash of economic titans and China promised retaliation over the plan for 25 per cent tariffs on high-tech products, Robert Lighthizer was testifying before Congress.

A self-described curmudgeon, best known for his elbows-up negotiating style on NAFTA, Lighthizer confided that his biggest fear is far removed from issues involving Canada and Mexico.

It involves America’s treasure trove of corporate research being taken by China _ by its spies, by its state-backed corporate takeovers, and by forced mergers and technology transfers as the cost of doing business with Beijing.

The Ohio-born trade lawyer rose in the Washington ranks decades ago as a staffer on the very committee where he testified Thursday; later, in the 1980s, he became a Reagan administration staffer who negotiated limits on steel imports, which he now credits with saving parts of the American industry.

Lighthizer told colleagues their careers will be judged by how they deal with China-related challenges. And he made clear his lack of patience with Economics 101 lectures involving Adam Smith.

Anyone suggesting governments leave the market to Smith’s “invisible hand” ignores that the market is already being meddled with, he said, by countries using state power to assist favoured industries and hurt Americans.

He cited rust-belt communities now gripped by the opioid crisis.

He said the threat continues: China established a policy in 2006 to dominate world solar-panel production _ and within a few years the U.S. industry had disappeared.

“This is not our spies (telling us this). They put this out,” he said.

He said the Chinese state-directed system will always be unique, and some behaviours will not change; Trump’s directive mentions hacking of companies and strict conditions on U.S. firms that want to do business in China.

But Lighthizer said the U.S. can impose costs on certain behaviours and try to mitigate their impact: “We can at least be in a position where U.S. industry isn’t wiped out. … And if we don’t do that, then shame on us.”

Here’s one well-known example of the attempt to affect Chinese behaviour: steel tariffs.

Lighthizer said the goal of these controversial tariffs, ultimately, is to change the market and press the Chinese to reduce their production. He said other international efforts have failed:

“So you try to make it expensive for China to have excess capacity _ that’s what we’re trying to do… Then you work closely with our allies.”

On that score, he made a surprise announcement, on the eve of the steel tariffs taking effect. In addition to exemptions for Canada and Mexico, he announced the European Union, Australia, Argentina, Brazil and South Korea would also get an initial pass.

It’s this kind of apparent improvisation that has Washington worried.

Congressional Republicans are pushing back on the substance of Trump’s trade moves; the Democrats are primarily denouncing the style. The top Democrat on the committee told Lighthizer he was concerned about the process.

Trump launched the steel-tariff process last year; just before the expiry date, months later than expected, he began reviewing tariff rates; he reportedly raised the rate to 25 per cent from 23 per cent because he wanted a nice round number; then he started handing out national exemptions up until the last minute.

“The tariffs are scheduled to go into effect tomorrow. … Total chaos on trade isn’t going to create a single red, white and blue job in America… We are counting on you to be a cool head in the middle of a very overheated atmosphere.”

He also denied being cool: “Being referred to as a cool head is an unusual experience for me.”

To wit, he got into some tense exchanges Thursday. Lighthizer apologized for referring to one Democrat’s opinion as “nonsense,”

and snapped back when another Democrat chided Trump for making up trade stats with Canadian Prime Minister Justin Trudeau.

Lighthizer defended a boss who shares his instincts on trade, if not the same mastery of its details.

As for the Chinese government, that’s another story. When his microphone temporarily went dead, one Democrat joked it might have been Russian meddling. To which Lighthizer replied: “I think it’s more likely the Chinese for me.”