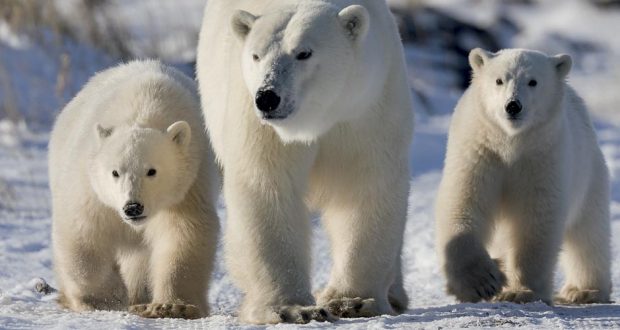 Canada’s polar bear protection is getting good marks from an international conservation group, but the World Wildlife Fund says the country could better protect important habitat and minimize threats to the iconic predators.

“They largely did a pretty good job of accomplishing what they needed to,” said Brandon Laforest, who helped develop the scorecard.

“They did not do a good job of bringing it up to the next level.”

And one of the country’s leading polar bear experts said Canada needs to do much better than the rating suggests.

“I think they’re being very kind,” said Andrew Derocher of the University of Alberta.

The group issued the scorecard for all five nations with bear populations. They were graded on how well they’ve fulfilled promises made two years ago as part of a 10-year plan to protect polar bears.

Canada, home to two-thirds of the world’s roughly 25,000 bears, is in the middle of the pack, behind Norway but well ahead of Russia.

Canada is praised for communicating the threat of climate change, monitoring populations, managing hunts and trade and incorporating

“We commend them for their commitment,” Laforest said. “Canada is leading the way.”

But there are problems. Canada couldn’t deal with an environmental emergency that could affect the bears, such as an oil or fuel spill from ships.

Not enough is known about the High Arctic habitat where the bears are likely to follow the steady retreat of sea ice.

And Laforest said while Canada does a better job than most countries at surveying populations, it isn’t enough in a rapidly changing Arctic.

“When you have decade-old estimates of populations and you’re trying to manage them actively in an actively changing environment, we feel even though Canada allots $1.5 million annually for those surveys, there needs to be a re-evaluation.”

Derocher agreed much of the population information Canada relies on is woefully dated.

“Our inventory frequency, while we have moved to improve that, is still grossly inadequate,” he said. “It might be adequate for harvest management, but in a changing climate it probably is not.

“We’ve got many populations that are coming on 20 years without re-inventory.”

For one population suspected to be in decline, survey results have yet to be released although the fieldwork was completed four years ago.

Three of Canada’s 13 populations are known to be declining. Bears along the west coast of Hudson Bay are down anywhere from 11 to 30 per cent, while those along the Beaufort Sea coast have lost up to half their numbers.

“There was a new aerial survey just done. My understanding was they found so few bears, they may not be able to get an estimate.”

Rapid change in the Arctic means that today’s critical bear habitat is likely to be less so in the future, said Derocher. He said Canada needs to conduct more research in the High Arctic, the so-called Last Ice Area.

“The critical habitat that we want to understand and protect long-term would be those areas in the high latitudes of the Canadian archipelago. And yet, there’s been virtually no work in this area.

“Do we see a movement to set up long-term monitoring to understand that ecosystem? I don’t see a lot of evidence.”