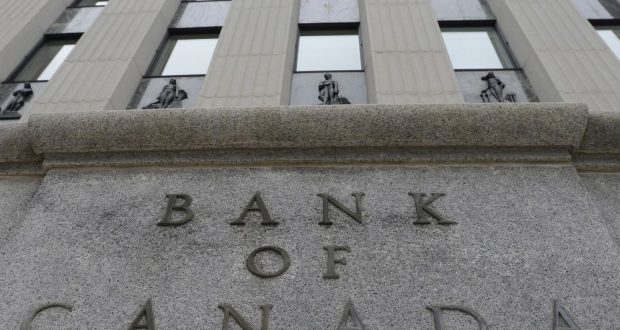 The Bank of Canada THE CANADIAN PRESS/Adrian Wyld

OTTAWA- The economy’s impressive run prompted the Bank of Canada to raise its trend-setting interest rate Wednesday for the third time since last summer, but looking ahead it warned of growing uncertainties about NAFTA.

The central bank pointed to unexpectedly solid economic numbers as key drivers behind its decision to hike the rate to 1.25 per cent, up from one per cent. The increase followed hikes in July and September.

While the central bank signalled more rate increases are likely over time, it noted the unknowns surrounding the future of the North American Free Trade Agreement, and the potential negatives for Canada, were casting a widening shadow over its outlook.

The bank said “some continued monetary policy accommodation will likely be needed” to keep the economy operating close to its full potential.

Governing council, the bank added, would remain cautious when considering future hikes by assessing incoming data such as the economy’s sensitivity to the higher borrowing rates. The statement raised questions about how quickly the bank will raise the rate from here.

Royal Bank of Canada was first among Canada’s banks to respond to the rate hike, raising its prime lending rate by a quarter of a percentage point, to 3.45 per cent, effective Thursday. Other banks are expected to make similar moves.

For Wednesday’s move, the central bank couldn’t ignore the encouraging late-2017 data, even as it acknowledged the risks about NAFTA’s renegotiation.

Governor Stephen Poloz stressed during a news conference that the bank remains data dependent, although he conceded that a rate hike wasn’t a “no-brainer” this time around because of the NAFTA talks.

“Of course, the big cloud over the forecast as well as our discussion is, well, NAFTA,” Poloz said.

“How immediate? How big? Lots of debate around that. Given those uncertainties, of course, the possibility of not moving (the rate) this time was in the air.”

In particular, Poloz noted that research has argued the trade impacts of the deal’s demise might not have such a major impact on Canada. However, he stressed that the end of NAFTA would likely take a big bite out of investment in Canada.

“We can’t just relax and assume that it would be a small shock,” he said.

In explaining the hike, the bank said in a statement that inflation was close to target and the economy was operating roughly at capacity. It also said consumption and residential investment had been stronger than anticipated, reflecting healthy employment growth.

“Business investment has been increasing at a solid pace, and investment intentions remain positive,” the bank said.

Exports have been weaker than anticipated, but are still expected to contribute a larger share of Canada’s growth, the bank said. It also noted that government infrastructure spending has helped lift economic activity.

“Today’s rate hike was a rear-view mirror move, but the Bank of Canada hints that the view out the front window isn’t quite as sunny,” CIBC chief economist Avery Shenfeld wrote in a research note to clients after the rate announcement.

“We share the Bank of Canada’s view that higher rates will be needed over time. But perhaps not as fast and furious as the market was starting to think. The bank’s statement put NAFTA uncertainties right up front.”

The Bank of Canada warned that lower corporate taxes in the U.S. could encourage firms to redirect some of their business investments south of the border. On the other hand, it predicted that Canada will see a small benefit from the recent U.S. tax changes thanks to increased demand.

For 2017, it’s now predicting three per cent growth, as measured by real gross domestic product, compared with its 3.1 per cent prediction in October.

Poloz raised rates in July and September in response to a surprisingly strong economic run that began in late 2016. The hikes took back the two rate cuts he introduced in 2015 to help cushion, and stimulate, the economy from the collapse in oil prices.

Up until a couple of weeks ago, many forecasters still had doubts that Poloz would raise the rate Wednesday. However, two strong reports,  the December jobs data and the bank’s business outlook survey, led many experts to change their calls.